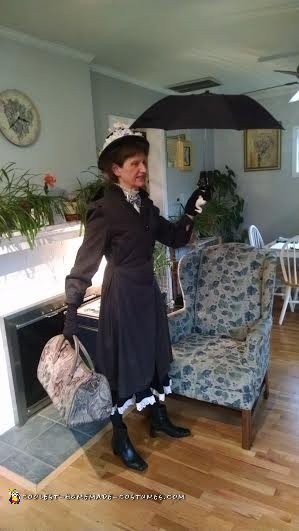 This costume is resurrected from one I first put together nearly 30 years ago, shortly after I had moved to Seattle. I was as poor as a church mouse at the time, and didn’t have a lot of money to spend. I had so many hopes, dreams and struggles; I wished I could make a list and put the ashes up through the chimney to bring me a magical nanny, as was done in the movie. I decided to be my own Mary Poppins.

All of the original items came from thrift shops, garage sales, and dollar stores. The carpet bag, blouse, hat and coat you see in these pictures all survived over the years, and are the original items, as is the bird.  I got all of them for a few bucks or even cents. I am not at all a seamstress, but remember hand-sewing a few darts into the side of the coat to make it more tailored-looking. They survive today in all their crookedness, so I must have tied lots of knots! Cheap cardboard or felt black hats are sold by the dozens around Halloween in nearly all the stores. I picked one up, bought fake flowers at the dollar store and taped them on with black electrical tape.

The bird on the end of the umbrella is a figurine that I also taped on with electrical tape. It never held very good, so there have been accidents. You may notice a chip or two in that bird. I have had to superglue it together at least once, but just can’t seem to part with it and replace it. Yes, I know; it’s not a parrot (it’s a pelican!). But there is something about it that just works. The original shoes were old fashioned, skinny black lace ups that I had brought over when I moved from Boise. I had originally bought them for a local theater production I’d been in, playing a street-walker in old London (Threepenny Opera). They’ve since disappeared or maybe fell apart, so had to be replaced; as did the skirt and umbrella. There is much more to say about the evolution of this costume, so read on!

At the time, I had a temp job as a clerk at Pacific Bell, before it became US West (remember Ma Bell?). We clerks all wore costumes to work on Halloween, and at lunchtime, we walked around downtown showing them off. Many, many women came up to me on the street, just gushing over the costume. I’ve only resurrected it a few times since then, but every time it was a hit. I would keep some handy items in the carpet bag, such as a bottle of “medicine” (aka booze) and a big spoon. Then I’d dole out the medicine singing “Spoonful of Sugar.”  This was popular at parties, even with the most hardened monsters.

The carpet bag was a real find. I also kept extra tape, scissors, safety pins, etc. in it, in case of costume failures, whether my own or others’. I have come to the rescue with these more than once, and it is always appreciated. Of course, that’s what Mary would do!Over a month ago, when I thought about doing this costume again this year, I couldn’t find some items, and thought they might be in the garage, which was on my agenda to clean out the next weekend. Then I fell and cracked a bone in each arm, so the garage had to wait. As I started to heal, I bought some replacement items such as a hat, new fake flowers, and a bow tie.

Now that I’m about healed, I started the garage project, and sure enough, there they were in a suitcase! The hat was faded and battered; but something about it, with all the lace and flowers (still on it!), was just so much better than the new one I’d created, which looked way too perfect and modern. I found that duct tape works better than electrical tape (especially for getting that problematic bird onto the umbrella handle), but couldn’t find any black. So today, here I am with a black permanent marker, coloring the grey tape black.  I also pulled off the lace that I had taped onto the bottom of the old skirt (which was shapeless and way too big), and taped it onto the one I have now, after washing it. (Ok, maybe I’ll do a few stitches if absolutely necessary.)

I never felt like I had to copy a character exactly down to every detail of clothing, hair or makeup. I feel it’s more important to somehow capture the essence of a character, while making sure to have the essential items that make it unique. A few people who saw my costume were first going to guess Eliza Doolittle, until they saw the carpet bag, umbrella and bird. Those three things nailed it. The rest is simply my attempt to create a vision of this prim and proper lady who is also quite magical and whimsical. Speaking of magic; every time I go out scrounging to put together a costume, I do get the feeling that it’s magic; the way things seem to always come together! 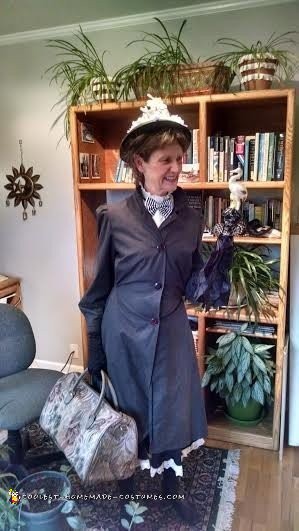 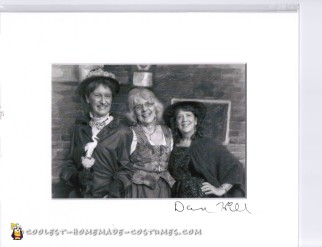