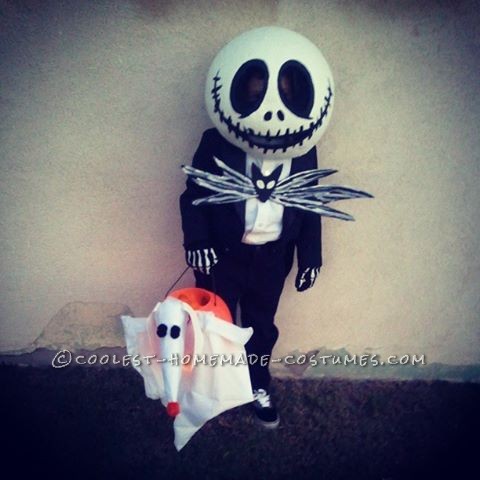 My son wanted to be Jack Skellington this year and wanted to make his own costume. My son is four so I knew I was in for a treat with doing most of the work. But I didn’t mind at all we are very crafty people.  I started looking up on how to make Jacks head. I read using a big plastic ball worked best. Well, that is what I used and the blue starch for crafts and tons of paper to paper mache this head. It came out pretty well until I realized that one side had not that many layers as the other side. Luckily I cut the side with enough layers of paper mache and I was able to cut the eyes and mouth and little wholes for the nose.

The other side that was softer, because of not enough layers is where I cut the hole for my son’s head. It was a little difficult to keep form because it was soft so I had to go inside with cardboard and hot glue in a shape to form it back to the roundness of the head. Other than that the painting part was easiest and then I cut some more cardboard to shape my son’s head and glued inside to make sure the head stayed steady. I cut some black stockings I got at Wal-Mart (and where I got the blue starch) and glued in the eye holes to make it look more like Jack’s head.

Then I just cut smaller holes that I lined up to my son’s eyes so he could see out of. The stockings were sheer so they worked out great. I used a tuxedo I found at the thrift store a couple of months ago that had the tails like Jack and my son said he didn’t want stripes he want to be all black for his clothes so I said OK and we left the suit alone. I’m glad because now he can wear it again because I thought I was going to have to paint the strips on and it would only be a costume suit. And for the bow tie  I cut out the shape for Jacks bowtie and had my son painted it black and I did the white outline and eyes. So last minute my son asked, “Why didn’t I make him a Zero?!”  I couldn’t tell him no so the night before I grabbed his plastic pumpkin for his trick treating and got to it.

Before I started I ran to the dollar tree and bought two white pillow cases, a plastic bouncy ball (small), some hot glue sticks and some fuzzy craft balls. I cut out a cone shaped thin piece of cardboard and glued it to the ball then glued the pillow cases to the cone and the ball to make Zero’s head and then I glued it to the pumpkin and glue eyes and nose. I cut out ears on thin card board and painted them white and glued them and I was done! I had some of those dollar tree plastic light up candles and threw some in there for the glowing effect during the trick or treating time and my son loved it!

I used kids black Skellington gloves from party city for his hands. My son was so proud to wear this costume to his school parade and out for trick or treating. This Halloween is the first to many homemade costume traditions. I don’t think I’ll ever go back to buying costumes and we had so much fun making it together. Thanks for listening to out little family story. 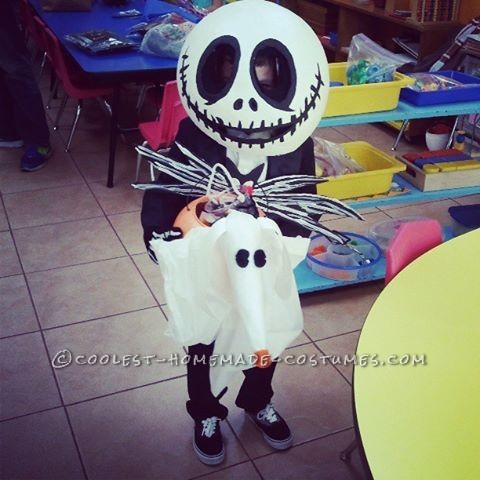