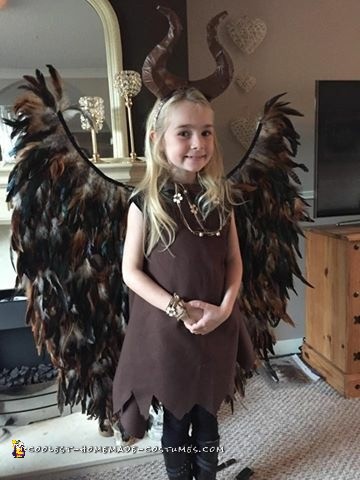 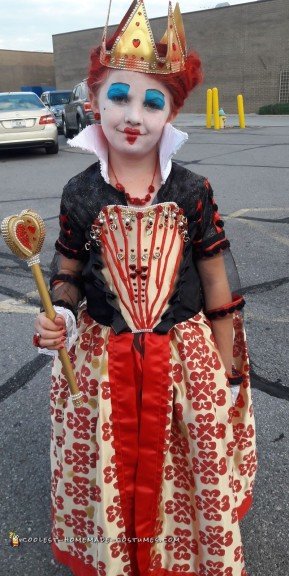 Every year I make my daughters Halloween costumes because I think it is a great “mommy and me” and “sister and sister” bonding. We pretty much just wing it. I give her a few choices about what I think we can make and then we just start brainstorming and working out the details. I made … Read more 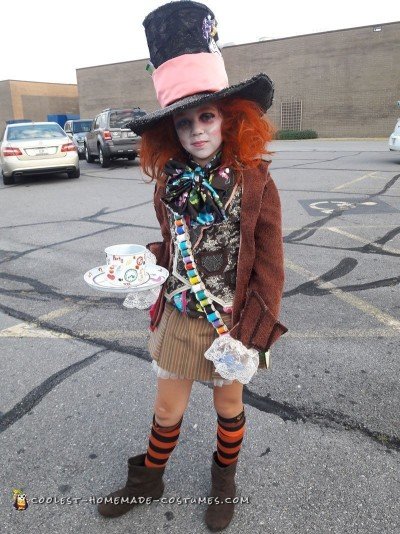 I made this Mad Hatter costume head to toe (minus the socks and shoes). I finished most of it by creating my own patterns. My daughter, Kielyn, helped with all the “extra’s” for it. This is her real hair, teased and color sprayed. She looks awesome and almost identical to the Johnny Depp version of … Read more 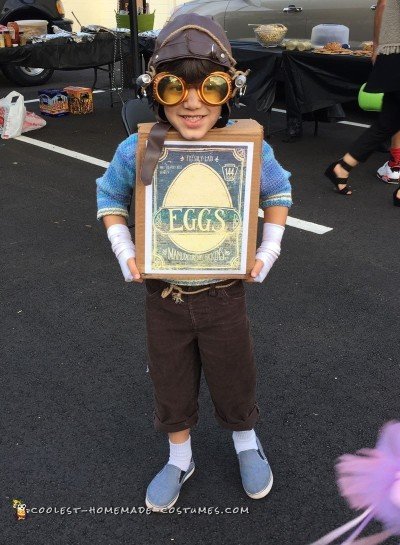 After watching the movie hundreds of times, my 5-year-old son became obsessed with wearing a Boxtrolls Eggs costume for Halloween. It was very easy to make.For the box: I took a medium size box and cut it open to fit my son’s size. I then opened holes in the sides and glued velcro for closing. I … Read more 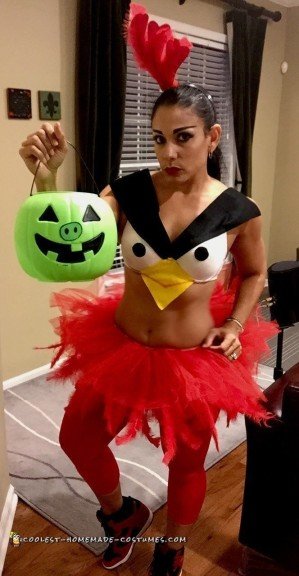 This costume was very easy. I used a red tutu I bought for $10 and sewed in a couple of red feathers. I took a Reindeer hair piece from the $99 Cent Store and cut off one antler and glued instead three feathers.I used a white bra, cut 2 felt black pieces for eyebrows and … Read more 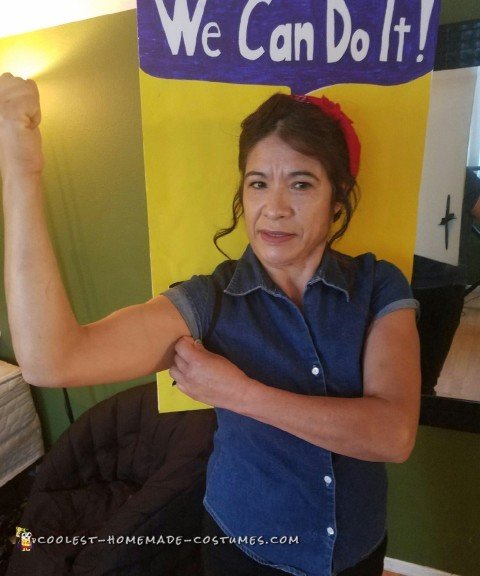 My hard working mother wanted to dress up as an inspirational image. What more than to show the hard working morale of women – “We can do it!”. We came up with just simply making a poster with the “We can do it” letters and attaching shoelaces to use it as a backpack. We also … Read more 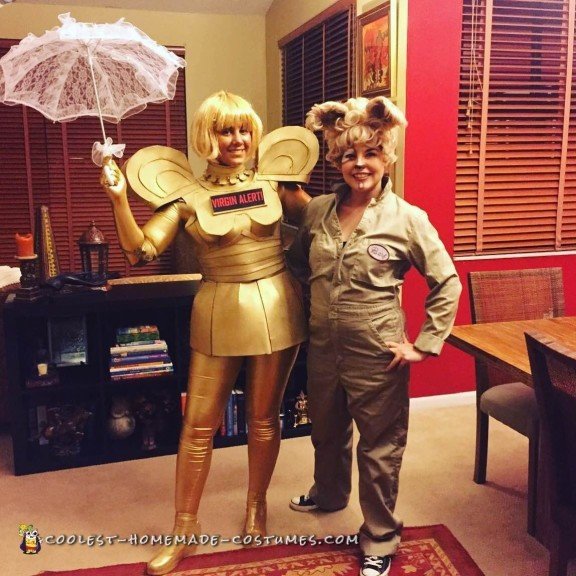 For the Barf costume, most of the items can be purchased from Amazon. The jumpsuit, Barf name tag, Barf wig, and tail. Pair it together with a pair of Converse sneakers and some face paint and you are good to go. The construction was only to hot glue the name tag, cut a small hole … Read more 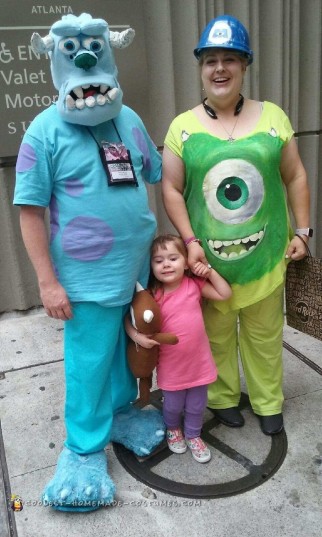 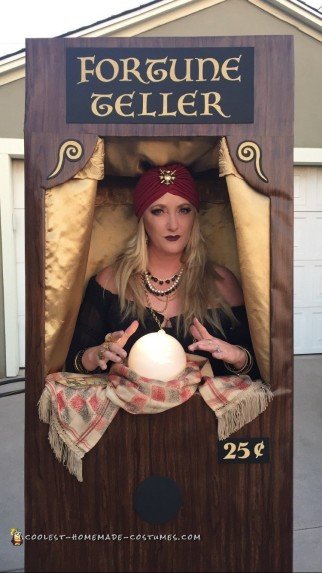 This “CARNIVAL FORTUNE TELLER MACHINE” Costume was relatively easy-to-make. The costume won first place in a costume contest! I decided to be a Fortune Teller for Halloween this year and wanted to go a step further than just wearing the outfit, so I created a costume that looked like a Fortune Teller in a Carnival … Read more 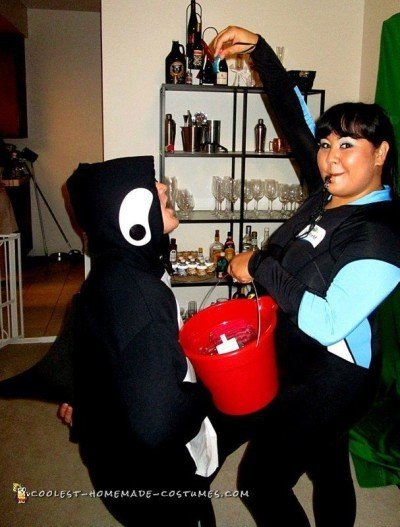 My husband and I have always done a couple costume, and this year was no different. I got the idea for the killer whale & trainer costume while thinking about what would be really funny, but also comfortable. Our costume won best group costume. We acted the part all night; I would get my husband … Read more 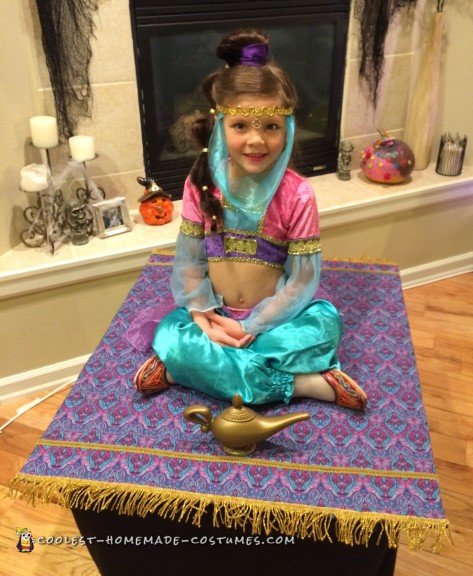 Who wouldn’t want to go on a magic carpet ride?! When my 5 year old daughter, Sophie, told me she wanted to be a genie, I knew I had to take it to the next level, as “just a genie” was too boring to me. I make her costumes every year, and love a challenge. … Read more 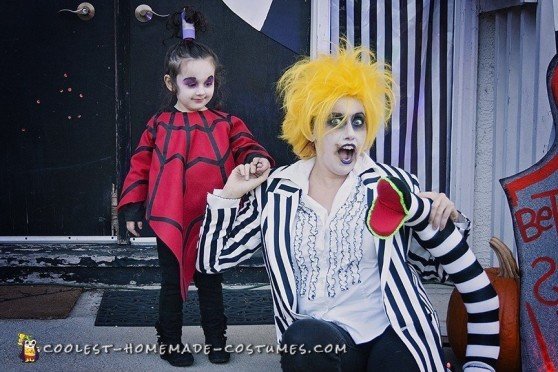 My October was quite busy and I had to seriously simplify the things that needed to get done. Trying to come up with an impactful but fun costume for my 2 and half year old was the challenge! I had decided on Lydia from Beetlejuice but instead of just dressing her all in black or … Read more 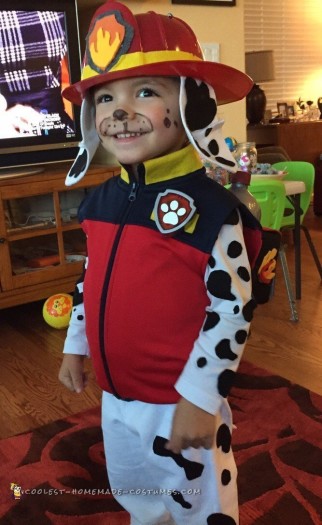 My son Loves Paw Patrol and Marshall. Naturally he wanted to be his favorite character for Halloween. So we made this Paw Patrol Marshall costume. Making our Homemade Costume To create this costume I searched my local children’s consignment store. I found a plain red zipper vest and a white long sleeved t-shirt. It was … Read more 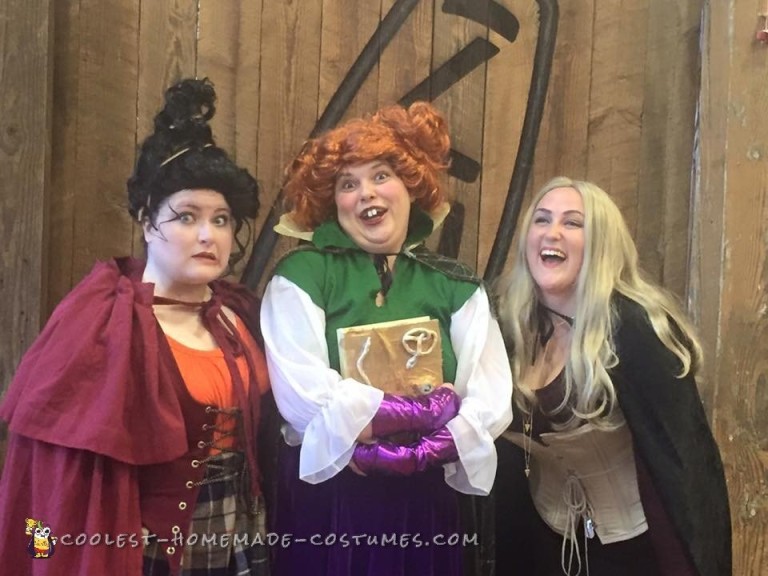 My coworkers and I threw this together for our company’s costume contest. Luckily, we’re all fairly creative, so we were able to make our costumes independently, with the big reveal the morning of the party. We were all pleasantly surprised and took first place in the contest. Everything came from either goodwill or our personal … Read more 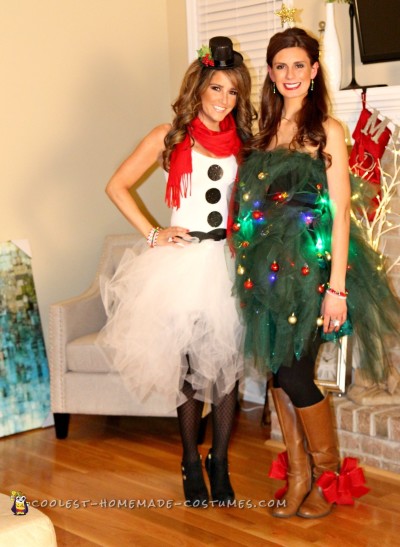 Decided to DIY with my bestie for an ugly sweater christmas party. We went immediately to Jo-Ann Fabrics and bought some tulle, hot glue and glitter. We are so happy with how it turned out and the reaction of our friends was priceless. When all was said and done we really wanted to share our … Read more 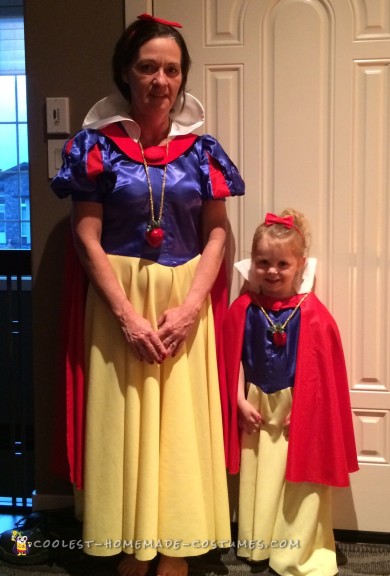 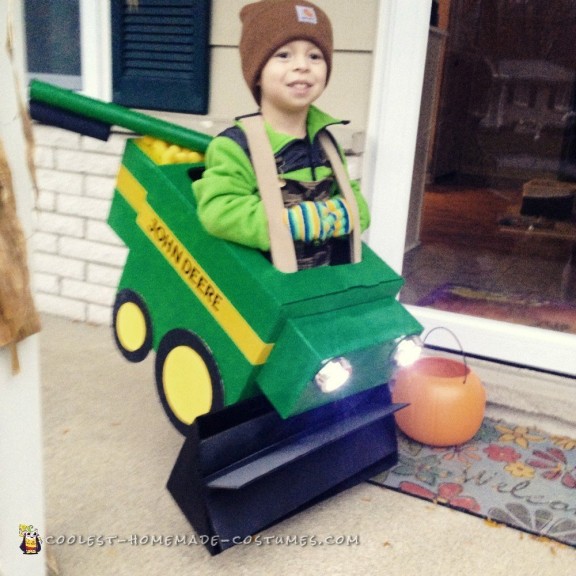 My son is in love with combines and insisted on being one for Halloween. This John Deere costume was a fun idea for both of us to do together. Farm Combine John Deere Costume Instructions We used a diaper box, shoe box and trash bag box for the body. The “unloader” was made with wrapping … Read more 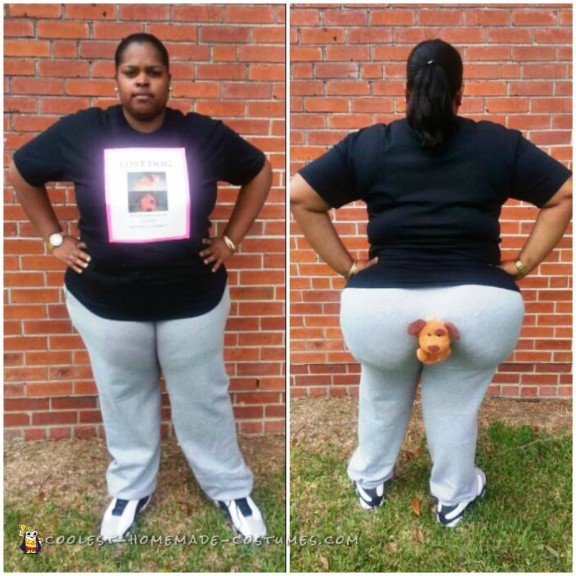 I started with the idea for this lost dog costume through Pinterest. It took me about a year to consider doing it. Lost Dog Costume Directions I purchased a t-shirt, jogger pants, poster board, a stuffed dog and round pillows. I hot glued the pink poster on my shirt and then hot glued the flyer … Read more 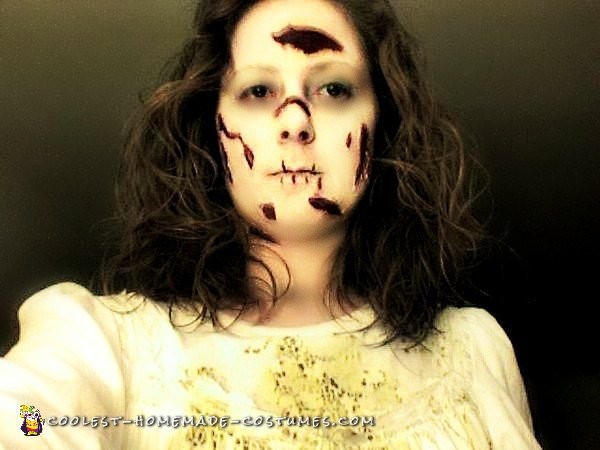 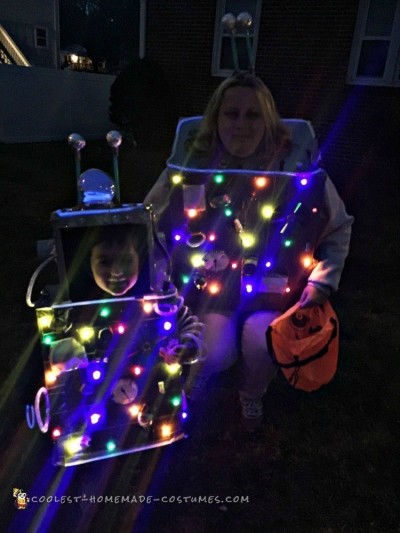 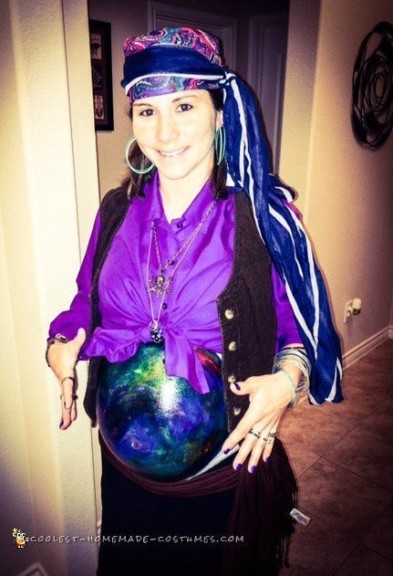 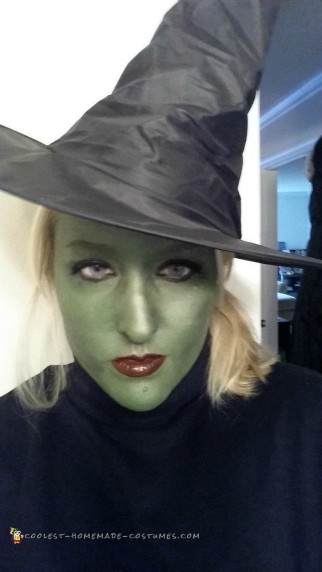 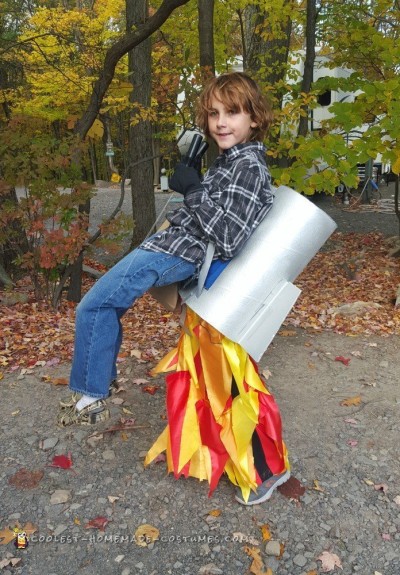