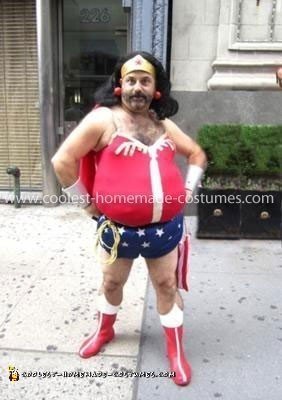 I made this Fat Wonder Woman Costume just for the fun of it and to make people laugh. I have worn it on Halloween and in several parades in NYC & NJ and it always gets lots of smiles and I always pose for tons of pictures! And YES! I have even met Lynda Carter … Read more 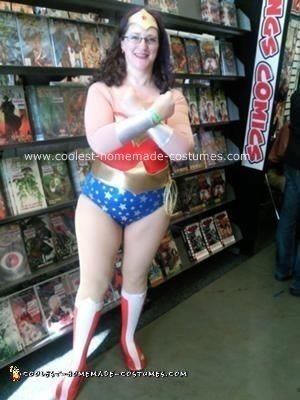 This Homemade Wonder Woman Costume is my latest costume work: (see attachment). This one was based on Kwik-Sew pattern 3445. I moved the split in the sleeve fabric down from shoulder height to below elbow, and made most of the sleeves in sheer Lycra, and the lower part in silver “foil” Lycra. I also moved … Read more 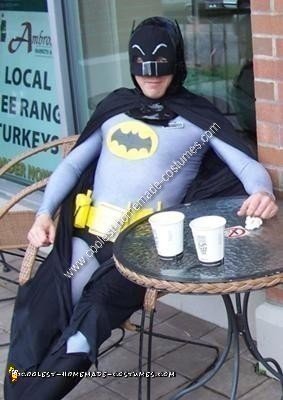 Everyone that works at my wife’s and my cafe dressed up as Batman characters (trying for the 1966 look). All I could find in premade costumes were modern batmen, so I decided to give it a shot on my own. Mask: I made my batman mask out of duct tape and an old black t-shirt. … Read more 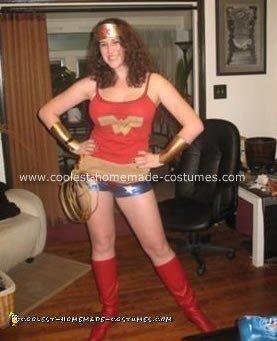 I was inspired by many of the costumes on this site, and had wanted to be Wonder Woman costume for a few years, so put in the time and effort to make it happen this year. I found electric blue shiny hot pants on eBay for about $10, red boots online for about $15-$20. I … Read more 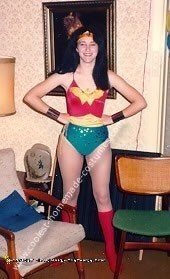 I made this Homemade Wonder Woman Costume for my 21st birthday party (some years ago now, but anyway). I put it together from 1) a red leotard that I already had (and still have) 2) aqua nylon lycra shorts that were my sister’s – she wore them under her gymnastics leotard, I think; I used … Read more 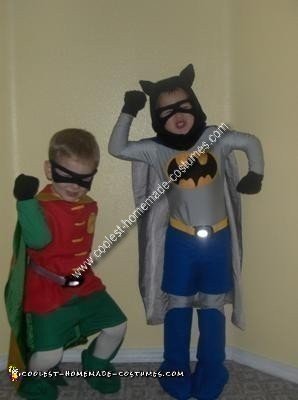 My little guys love Batman and Robin so naturally that is what they wanted to be for Halloween this year. I wanted to go retro with the TV series style of Batman and Robin, however, we have rather cold weather for trick or treating up here in the great northwest so I opted to use … Read more 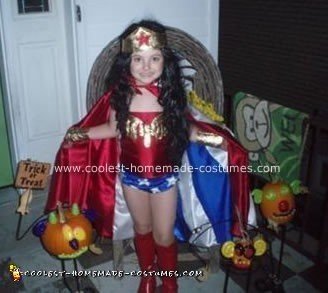 This is Daisy, she’s a big fan of Wonder Woman and she asked me to make her a Homemade Wonder Woman Halloween Costume for Halloween. I haven’t been sewing long, but i figured I’d give it a try. I think she looks great and it turned out well for my first attempt at sewing without … Read more 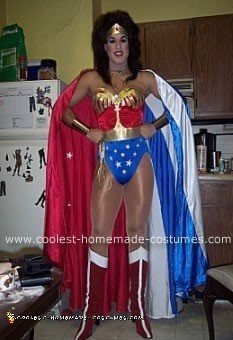 I have always loved Lynda Carter as Wonder Woman. So back in 2007 I decided to dress up as her and create a homemade Wonder Woman costume (it was difficult being that I am a guy). I prepared for Halloween months in advance. I went to tons of fabrics stores searching for the right colors … Read more 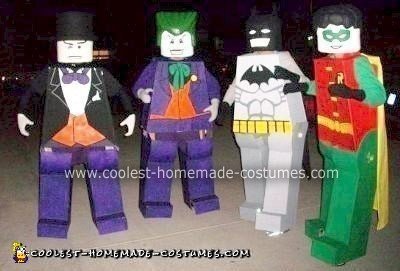 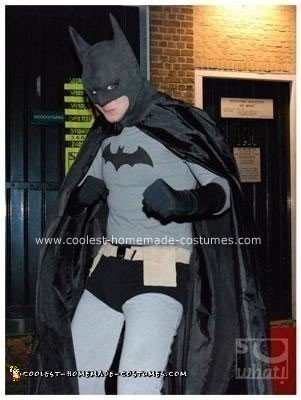 I made this homemade Batman costume suit for a party I went to. I’ve got another photo somewhere with me and mr.T, I’ll see if I can find it. For now I’ll upload the photo that was taken in front of the club. The suit kinda lacks a proper belt, but keep in mind that … Read more 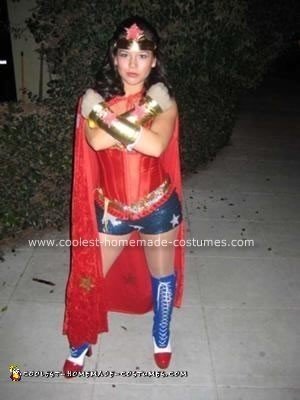 Wonder Woman is my absolute favorite! But when I decided to dress like her for Halloween, I knew those packaged store costumes just wouldn’t cut it. I set out to my local fabric store in search of material that would resemble the original Wonder Woman style. And it was easier than I thought it would … Read more

I wore my homemade Wonder Woman costume during a super heroes parade for a Bachelorette party and then for a Carnival (the theme was television). I always loved the character of Wonder Woman, I used to read the comic book and watch the series and Justice league. I chose to come back at the origins … Read more 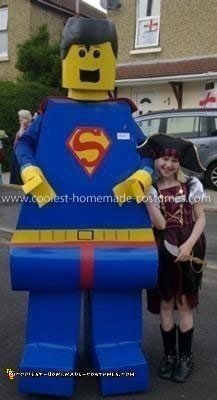 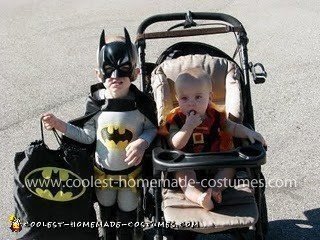 This is a batman and robin costume. The batman is a dance unitard with the batman symobl sewn on , The cape is just black satin with the same emblem sewn and a bat scalloped edge on the bottom part. The boots are just vinyle material so are the gloves. The mask is from the … Read more 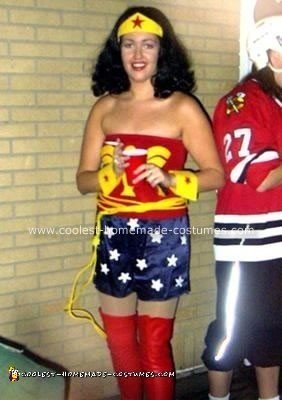 I loved this Homemade Comic Book Wonder Woman Costume. Every piece of it was handmade (other than the wig, tights, and boots). For WW’s top, I drew and cut out the shape of the eagle from yellow felt and sewed it onto a red tube top. For the shorts, I purchased a pair of men’s … Read more 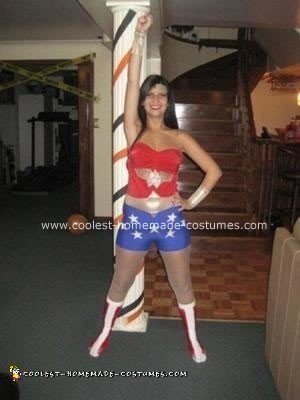 My friends andI wanted to do a group Halloween thing so we were all superheroes and made our costumes ourselves. I made my homemade Wonder Woman costume by looking at pics on this website and I have NO sewing history so if I can do it you can do it.. I started off by buying … Read more 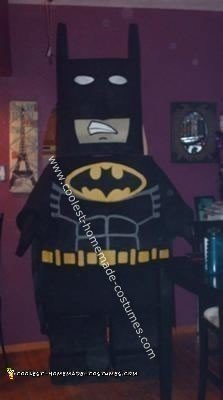 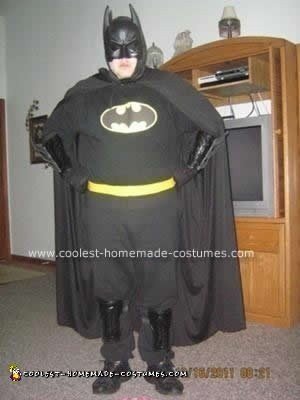 I made the Batman costume out of a black sweat shirt and pants. I ironed on the logo to the shirt. For the arms and legs I used soccer shin guards and for the spikes on the arms I made out of poster board and hot guled them to the shin guards. The belt I … Read more 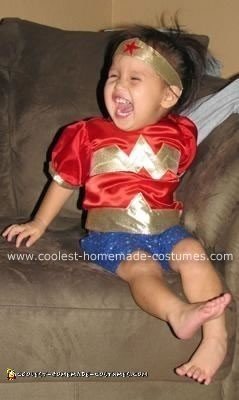