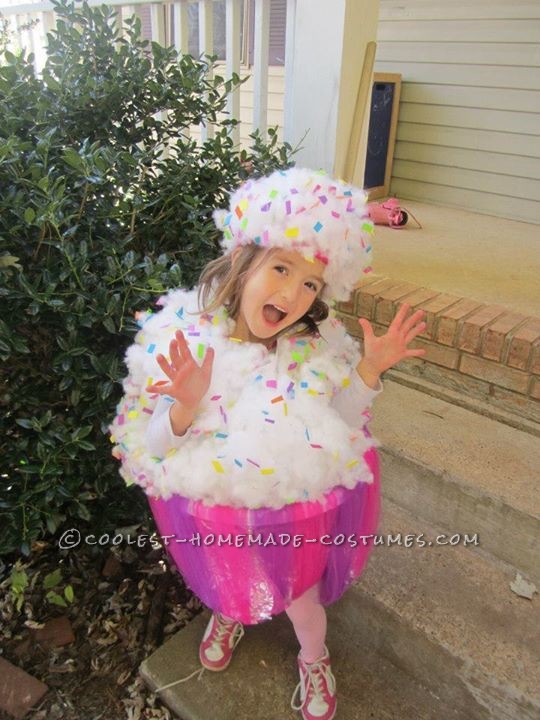 It was that time of year again. Time for me and the kiddos to go costume shopping. We were at our local retail store for a while and my daughter could not find what she was looking for. I asked her what exactly what she wanted to be and I couldn’t belive what her response was. “Mommy, I want to be a cupcake! ” I had no idea where she got that idea from but I just wanted to make her happy. We kept looking but nothing. I went home that night to see if the internet had any for sale but all the ones I found were very flimsy and didn’t even look like a cupcake. A cupcake is supposed to be big and fluffy. A cupcake is supposed to have a lot of pretty sprinkles and a bright red cherry. At least that was my idea of what a cupcake looked like. Then the idea came to my head ” Why don’t I just make it.”. This was a little scary to me but I wouldn’t give up on my daughter’s creative costume choice. The next day I started the planning. I wanted to start with the easy part so I started with the hat. I found an old winters hat and then thought what I could use for cupcake icing. I decided to use pillow stuffing. I got out my hot glue gun and started glueing until the hat was big and fluffy. I then needed sprinkles. I used different colors of foam paper and cut them into little chips. Warning: glueing all these little sprinkles takes some patience. I then needed a cherry. I found a little red ball and glued a red pipe cleaner and put it on the very top. This hat took me about an hour and a half to make. Now it was time for the main part. I decided to use one of my husband’s old t-shirts and started glueing the pillow stuffing and sprinkles to it. By the time I was done, probably 3 hours later, it’s was looking great. Lastly, I had to figure out what to use as a cupcake wrapper. I couldn’t think of anything until my wonderful son came up and tried to hit me with an old laundry basket. It was fait! I cut the bottom off and tied ribbon to the top to make straps. I then started wrapping tulle around the basket to make it colorful. Of course I used my daughter’s favorite colors pink and purple. With my fingers crossed it was time for my daughter to try it on. First, I had her put on a white long sleeve shirt and white tights. Next, I put the basket on her. The ribbon straps were slipping so I untied them and retied it to her fitting. I then carefully put the icing on her. Lastly, was the hat. After everything was on she truly had her wish. She was a cupcake. My wish had also come true. She loved it. Everybody did! When we went trick-or-treating she got nothing but compliments and cany of course!