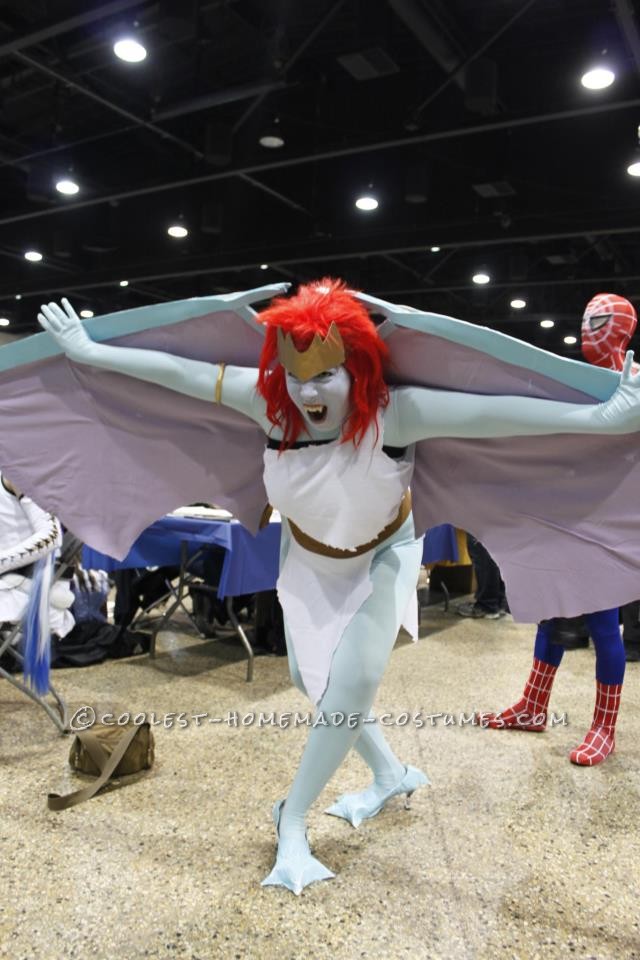 For those who never saw Disney’s brilliant cartoon TV series Gargoyles, I pity you. It was an amazing, gritty cartoon that showcased some brilliant writing along with tie ins to actual history and Shakespeare. My favorite character from this show was Demona, originally part of the main gargoyle clan who went her own way when her prejudices against humanity were not shared by her clan. It was a fun costume to make and wear (haven’t we all wanted to have wings?)

The first time I made this costume, I wore body paint. This was messy and uneven by the end of the night so I later opted for a blue zentai suit. I then purchased a red rocker wig and plastic vampire fangs (I recommend Scarecrow fangs because they just cap your canine teeth and are molded to fit your teeth exactly). The “crown” was made using cardboard (cut into the proper shape) covered in gold vinyl fabric and secured behind my head with elastic. The clothing pieces (skirt and top) were made from crudely ripped fabric sewn together.

This is one of those rare times where being a lousy sewer will work out for you! The wings were made using four pieces of wooden siding (two for each wing) attached to a small backpiece made from a wooden plaque (you can get them at craft stores). I then attached fabric to the wings using a glue glun and then glue gunned craft foam over the wooden wing frame wo make it look more like natural wings. The wings did have a hinge so I could open and close them. The feet were fun to make (although several hours of wearing them hurt like you wouldn’t believe). I bought high heels with a clear heel to give the illusion standing on my toes (like the real gargoyles’ feet). I then cut off all of the shoe fabric and began duct taping together new shoes. I made the points of the toes and the back clat with craft foam and secured them with more duct tape. After a solid paint job, I was done! There is a small tail which you can’t see that I made from fabric stuffed with polyfill

Demona was an amazing costume to make. The shoes in particular were very tricky but as you can see, the results were amazing. I am currently working on a way to make the wings so they have invisible wire feeding through them so I could open and close them without holding the wings myself. It’s a challenge but I’m up for it! 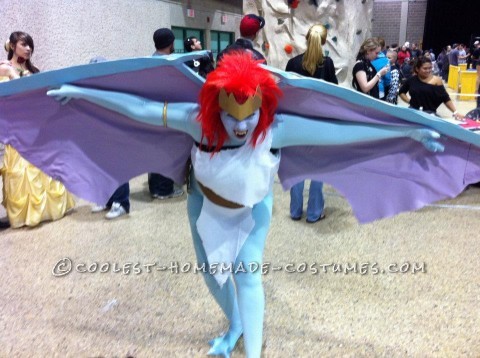