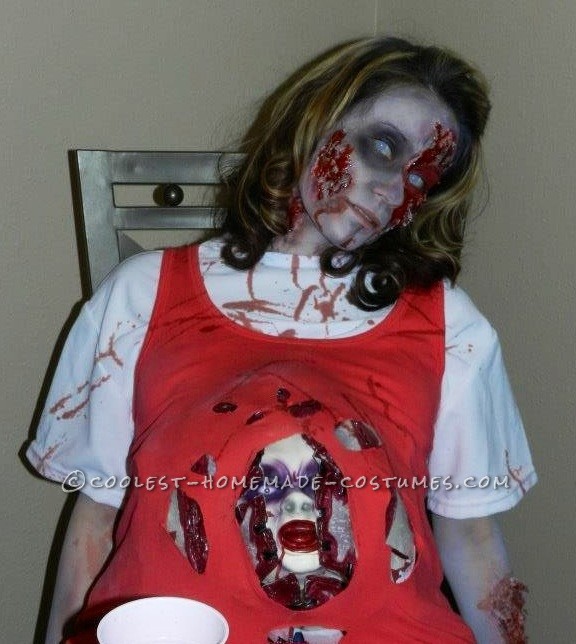 I found the zombie baby belly at a costume shop and went from there. The belly was battery operated, I would press a little button that was under my shirt and the baby’s head would come out of a rotten belly and start screaming like a demon, his eyes would flash red too! The belly was connected to just a plain white tee shirt. I bought a maternity tank top cut a hole so just part of the belly would show and the baby’s head would be trying to bust through the fabric. Then sprayed blood all over the shirt.

My make up was the most challenging. I did that 100% by myself. I never attempted a zombie look before. I did research for weeks on the look I wanted to create. I used fake blood, clown face paint, liquid latex, toilet paper and dried oatmeal for my face and arms. I bought white mesh contact lenses as well. Those were hard to see throw but it really gave a great effect.

I won best over all costume and best scariest costume. I scared many little kids and even my brother couldn’t look at me, haha. Lots of people at the party wanted to take pictures with me including people I never met! I had several people ask me to do zombie makeup on them next year!