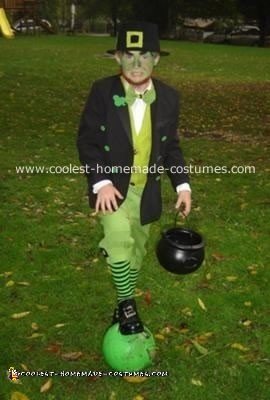 This Leprechaun costume was made out of old clothing and junk we found around the house. We recycled some parts from previous Halloween costumes, such as the socks which were used from an old witch costume, and the cauldron which we use to collect candy with.

The costume was cheap, affordable and looked a lot better then the expensive pricey one’s you would find in the stores. It took a lot of hard work and sewing but it was worth it because the costume looked great. We got many compliments at the costume party he went to, and I’m sure we’ll get many more on Halloween.

I recommend everyone to try and create their own costume because the end result look’s a lot better then any store bought costume. Sure it takes a lot of work and effort but in the end you have a great and affordable costume.

For the costume we used:

-old black leather shoe’s, where we sewed on a gold buckle we found around the house.
-socks from a previous costume, a couple years before
-old pants, which we hemmed, cut and glued felt buckles on the pant legs
-white dress shirt
-an old green jacket, which we cut and created it into a vest
-an old tux jacket, which we glued on clover’s and green buttons made of felt, we also used glitter to make the back
-the bow tie was made from the left over pant material
-we found the hat and glued on a square from the leftover green jacket
-an old cauldron