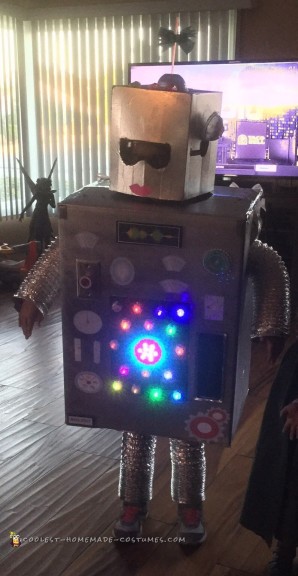 I always look forward to Halloween, so that I can dress my little girl as some sort of Princess or in a cutesy costume. Well, this year she went to Daddy instead of me and asked if he would help her build the greatest robot costume. They started searching for the perfect box in order to construct her costume. She wanted something homemade. They finally found the perfect box.

We went to Home Depot and purchased silver spray paint and dryer duct. The costume was pretty inexpensive. We also ordered LED lights on line. The costume took about 3 days to fully put together. The spray paint took a while to dry.

We mostly used accessories we found around the house. Plastic ice drink lids were used for the ears and top of helmet. The eyes were plastic safety glasses. We printed out gauges from google images. All of the different LED lights really add the costume pop. We glued a thick piece of fun foam to the chest and then we used round Velcro tabs to put the led lights on. We did this so that we were able to turn the lights on and off. We also used glow sticks and finger lights in the top of the helmet.

Trick or treating was fun at first, but then became slightly overwhelming because our daughter kept getting stopped by fellow trick or treaters asking to take pictures with her and of her.

The costume was easy to walk with (I really thought it was going to be a struggle). Although her brothers accompanied her to each and every house, at the end of the night her bucket was emptied twice in order for her to keep filling it. Her costume was a hit! I have to admit, I was great! Thanks. 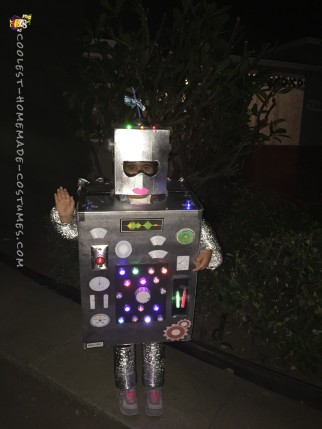 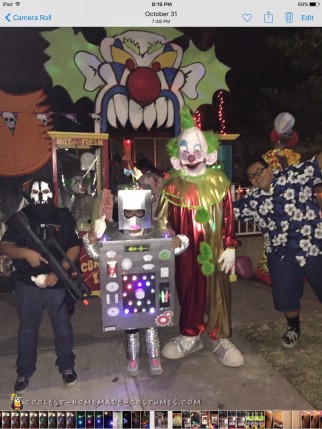