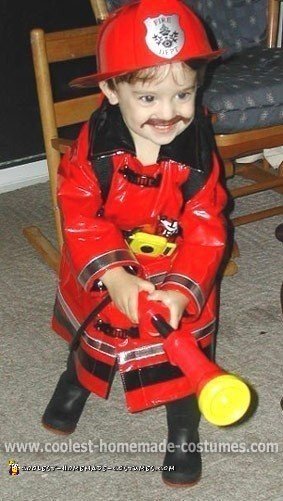 My son, who was 2, almost 3 at the time, wanted to be a Rescue Hero for Halloween. The most popular Rescue Hero is Billy Blazes so that’s what we went for.

I found an adorable fireman raincoat online. It was red, which was important and a bit hard to find since most of the fireman coats that year seemed to be yellow.

It was very high quality and had nice black latches in the front and reflective stripes around the sleeves and everything. I bought it a size too big so that it would hang down to his knees, like Billy Blazes’ does. 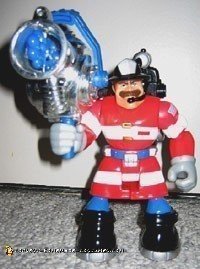 I bought a cheap plastic fireman hat and some black rubber rain boots on ebay. The trickiest part was to find some sort of “gadget” for him since Rescue Heroes always have cool gadgets to help them rescue people. I finally found the perfect thing- from Discovery Toys, a water pack that went on the back and had a hose that came around front for the child to hold. And it would really squirt water! What fun! (And less violent than a water gun. I had been considering a super soaker with the back pack type of thing).