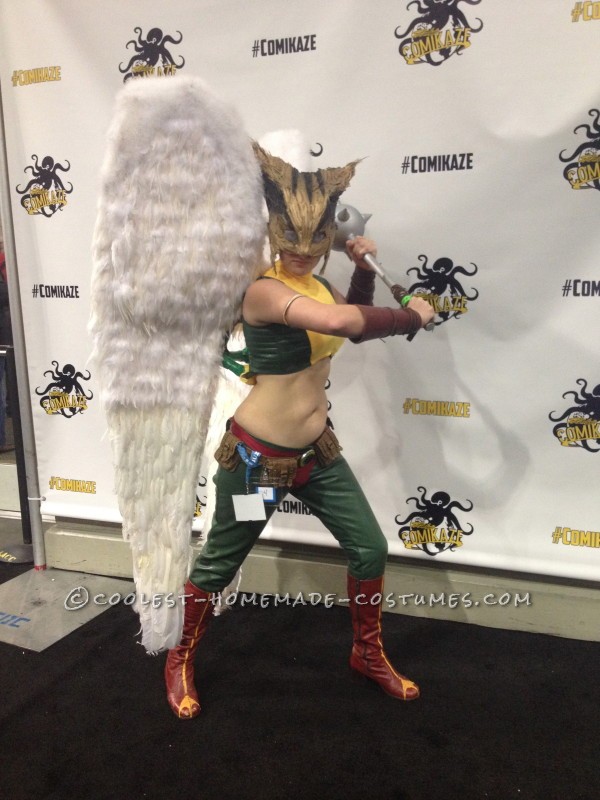 I wanted to make a realistic Hawkgirl costume but had no idea where to start, so I looked at tons of photos of her to see what direction I needed to go in. One thing stood out-big wings! That’s the first thing I started on.

I decided PVC was going to be the lightest, cheapest, and easiest thing to use. Though there aren’t a lot of options as far as angles…so lots of trial and error. I needed to use the PVC pipe glue to get the PVC not to pop out of the elbows so when something didn’t work I generally had to start all over. (I just used a hand saw to cut the PVC) :( I started out with simple wing shapes and then had to figure out how to attach it to my back. I created a packpack like system as shown in the pictures using the lid to a plastic bin. That way the two inserts would pop in and down to secure them. The ‘backpack’ went on under my shirt hidden and I cut holes in the back of my shirt for the wing inserts. This proved to be difficult to handle myself. I usually had to have someone help me put the wings on though I could take them off myself. The advantage was the wings could store flat. I attached the wings with a hinge so I could do it. I braced the hinge with glue and screwed it into the PVC to make sure it would never come off.

Now I needed to feather the wings somehow. I decided to use muslin. I cut out the shape and sewed most of it then put it on like a pillowcase. I sewed the last of it closed and taught. I used feather boas for the top soft part and was (thankfully) able to find pre-strung feathers on ebay to cover most of the rest all using lots and lots of hot glue. Once I got to the larger feathers I had to string them by had. I hot glued them between two layers of narrow ribbon then hot glued the ribbon on the muslin. The largest feathers were just hot glued straight to the muslin.

Later I greatly improved them by adding another segment so the original wings could pivot out a bit. I added the skeleton making it just like the other parts of the wings and covered it in the same muslin and feathers. I also added 4 T elbows to the original wings by cutting a portion of PVC out for each. I felt like I was doing surgery! And I added 2 crisscrossing metal dowels to give them a 3-D feel. I just wish I’d thought of this in the first place. Would have saveda a lot of time. I sewed her back up and put one thick bolt through the top of each wing to attach them. I found a bolt that was just the right length-long enough to attach a nut at the end but not stick out. For the backpack part I put a length of webbing with buckles (from REI) through the bottom of the part that would be against my back and wrapped another length a bit higher for shoulder straps. The bottom of the shoulder straps are on the chest buckle. This keeps them tight and straight.

Thank goodness for Michaels! I found nearly everything for the mask there. I used a moldable wire mesh to get the basic shape and fit it to my head, attaching a plastic eye mask. I cut the eyes a bit bigger. Honestly can’t remember how I attached it. I think it was a combination of glue and the plaster strips to keep it on. Then I took what is basically a roll of plaster and cut it into strips and covered my mask. I spray painted it gold in case it would show through the feathers. I sprayed the mask with a spray paint shaped glue can and layed the feathers down. Once the feathers were attached I spray painted them gold and used a cut out I made with paper for the black spray paint.

At first I used vinyl for the clothes but found it wasn’t really durable especially since my pattern making skills are a bit lacking and I didn’t have a sewing machine at the time. When I improved it I used real leather I had found online. It took a long time to find an acceptable color. The first version was literally green screen green. When I took pictures in front of a green screen at Comic Con my costume would disappear and you would see the background right through me. :( I took a pair of pants I almost used instead and took them apart at the seam to create my pattern. The leather is still a bit thick but it’s way better than before. I had to add a V of elastic to the center back of the pants so I could bend over. Otherwise it was a wardrobe malfunction waiting to happen.

For the top I used paper to trace out the shapes I needed to fit me. Leather for the sides and spandex for the yellow middle. The fact that the spandex stretches really helps make up for little sizing mistakes. I used cotton panels to pad the detailing on the sides of the top to give extra texture where there are some decorative lines.

For the outside undies I matched up the fabric to the pants so it would fit them just ride and hemmed it up. I made them a bit high in the back to help cover when I bend over. Turns out it was a really helpful idea.

For the belt I bought 3 inexpensive matching purses at Ross that had the right color for me and nice pockets. -More difficult than I would have thought. I used the purse handels for the belt and sewed the pockets on. A coworker found this fabulous metal round thing with a hole with threading on the back (which looks like a larger version of the foot of one of those old school chairs you could adjust the height of a bit). I found a bolt that fit the threading and my friend’s dad sawed off the excess length. I slipped the bolt through the front of the belt and painted it with black puff paint and yellow stained glass window paint.

I made the mace from scratch as well. I used a hard smooth styrofoam sphere and created the spikes from polymer clay. I made them like christmas trees with a wood dowel sticking out the bottom. I carved the shape of the ‘trunk’ and the hole for the dowel into the styrofoam and glued them in with gorilla glue. They have remained very secure. I glued in a very large wooden dowel which I sawed to my preferred length in the styrofoam as well and covered it all with many many layers of silver spray paint. Then I finished the handle off with a leather strap. I gorilla glued it in a couple places to keep it from loosening up and moving.

Now I’ve got a complete realistic costume. It took a lot of time and work but I didn’t need any specialized tools more than a drill, handsaw and sewing machine.