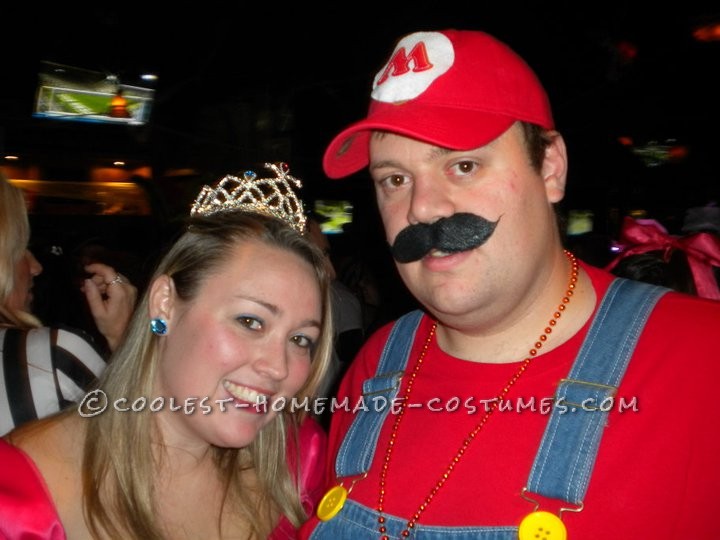 After finally settling on a couples costume that my boyfriend agreed on, Princess Peach and Mario, we started looking for costumes we could buy to make it easier.  All of the ones we found in stores or online were either super cheesy looking or too expensive.

So I decided we could be creative and do it ourselves.  Mario was easy…overalls and a red long sleeve shirt from Wal-Mart, a red hat that he owned already, white gloves and a mustache from a costume store and 2 big yellow buttons from the craft store.  I attached the buttons to the overalls with hot glue and safety pinned a felt letter to the hat (so we didn’t ruin his football hat) and ta-da, Mario!

Princess Peach was a little more difficult.  With the help of my mom, the sewer in the family, we turned my old hot pink prom dress into a short, cute princess dress. We cut pieces off of the bottom and filled them with fluff to make shoulder poofs.  Then we pulled the bottom up to make it shorter and so that the tulle would give the dress body.

All I had to by was a light pink piece of fabric, a crown (from a costume store), pink socks and a gem for the center of my dress.  I also covered a star pillow that I had with yellow fabric and glued a felt face on to be an accessory to the costumes.  Somehow it did not make it into any of the pictures though.

Even though the dress was a lot of work, they both turned out well so we were very happy with them! 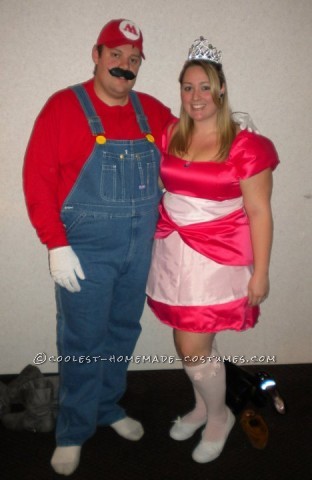