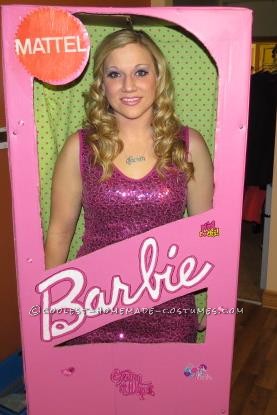 I had known for a couple months that I wanted to be Barbie for Halloween.  I got a box and cut it down to the correct size and using an image online cut out the front of the box.  Choosing just the right pink was essential for my “Barbie” image.  I painted the box and had my Mom help with the lettering.  I had an idea for Barbie’s outfit in my mind and had shopped several times for it without any luck.  Finally I found exactly what I was looking for online at a site called “Sexy Dresses”.  It was pink and sparkly, exactly what I was looking for.  The day it arrived my Mom texted me to let me know my dress had arrived,…”in a VERY TINY box!!!!”  We lined the inside of the box with a contrasting fabric, using a hot glue gun, and put drawer handles inside with washers inside and out so the screws wouldn’t pull through the cardboard.  This allows me to hold the box and move about easily.  We also screwed 1/2 pvc pipe in the 4 corners originally for legs but then decided it might be hard to move around with them hanging down so I cut them off and glued couplers at the bottom of the box and brought the 4 legs along.  Cut the legs depending on your height. Then if I just wanted to stand in the box I could and not have to carry it.  The legs just slip into the couplers.  You do need assistance getting in and out of the box.  The last thing I did was apply some Barbie stickers I had purchased at the store to the box. I did my hair, applied my make-up and wore a “Barbie” necklace and I was ready. My friends and I went out on Oct 26 to a couple of bars in our town. I won for Best Costume in one of the bars. The prize was some beers.  We then went to a place down the street and there were a couple of girls who got up front and put on quite a show.  They were declared the winners but there was such an uproar because many in the crowd thought I should have won.  I was disappointed but then someone told me I should save the costume and go out the next weekend to a place in the next town that was giving a trip to Mexico away.  I had to work the next week but as soon as I got off I hurried home got Barbie ready and we hurried over to the next competition.  I won!  A trip to Mexico for two.  It was fun wearing the Barbie costume.  People came up with so many funny lines. Of course all the guys kept telling me that they wanted to play with Barbie and one guy told me that every time I came out of my box I lost half my value. 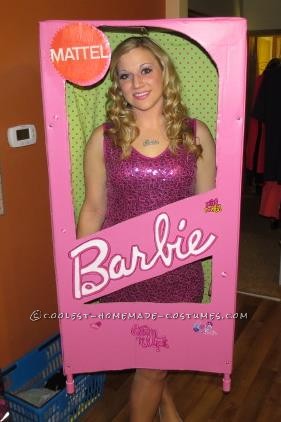