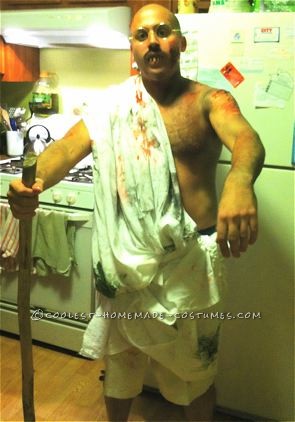 It was the first Halloween that my head was going to be shaved.  I wanted to incorporate that into the Mahatma Zombie costume.  I went to South Africa and since Ghandi did a lot of his movements over there, I thought that would be great.  I was getting the costume together, which is pretty easy (sheet, white shorts, glasses and a pole).

Then I thought that I could make this much more creative.  As a big fan of “the walking dead” I thought I could be a zombie Ghandi, even better.  Mahatma Zombie!  So I shaved my beard into a mustache, put on the glasses, ripped up the sheet and put blood and zombie make up all over.  I even got the zombie teeth together.

People loved the costume and said they have never seen a costume like that.  Was a very easy but very awesome costume.  One of my favorites! I’m not sure how I will beat it next year.