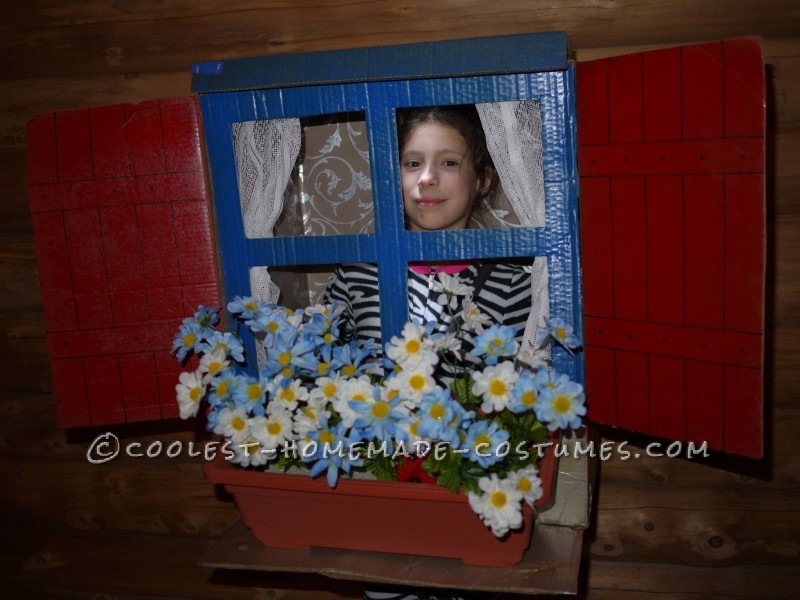 As I was driving home one day, I threw words in the air for costume ideas. The word that stuck to one of my daughter’s head was “window”. I didn’t pay much attention to it until the day before Halloween, when, after school, my daughter said; how about my window costume? So we went to purchase a few items: a plastic planter, plastic flowers, foam to stick the plants into and self-adhesive wallpaper. Cost: about 20$. We found a big box with extra cardboard at home.

Started by cutting an opening to slip the upper body through. Used old bike tubes and attached them to the bottom of the box as suspenders to carry the box from inside. Used the bottom flap and reinforced with wooden sticks at the bottom to hold the planter (which was glued on). Spray-painted the outside of the box with three different colours and stuck the wallpaper in the box. Used a ruler to draw wood-like lines on the shutters (not forgetting the hinges on the outer side.) Then cut 4 squares in another piece of cardboard for the front.

The finishing touch was definitely sticking a battery operated LED light on the “ceiling” and installing real curtains that I cut from old curtains generously donated by my aunt for this specific costume. This light could be turned on and off simply by pressing on the flat bulb.

My daughter wore her pajamas (with many layers under to stay warm during the October Canadian evenings), some chicken pox red dots on the face and the trick was done! She had to turn off the light when she walked, otherwise she couldn’t see in front of her. Then turned the light on as she rang the doorbell.

The costume was a total success! It was so fun to see people giggle as they saw her walk by. Comments most heard were: how creative, what a great idea, never seen that before! Everyone wanted a picture with her and best of all, she got extra candy at every door! Not bad for spending Halloween inside her little window!