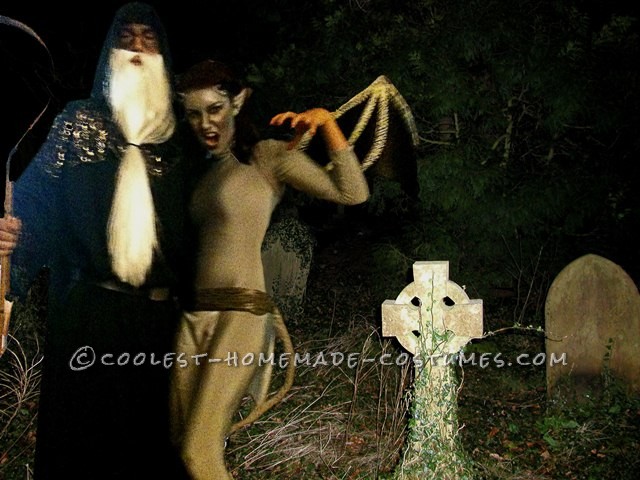 My husband and I were talking about cartoons one day at the ripe age of 28.  We, two grown adults, still love our cartoons from the early 1990’s. Compared to today’s cartoons (which seem to be popularizing Japanese animation and titles that I can’t even read, much less pronounce), our generation’s childhood television was simple.  There was a cartoon about a half-cat, half-dog, called “Catdog.”  A cartoon about monsters was “Aaahh!!! Real Monsters,” and of course we loved “Goof Troop,” “Captain Planet,” and the list goes on.

As Halloween lovers and children at heart, we wanted to bring back the good old times of television in its prime.  So we chose to create costumes from the show “Gargoyles” which aired initially in October 1994. It gave us the relatively dark tones we wanted to portray for Halloween, but was still unique and interesting enough to really make the costumes our own as well.  The cartoon contains complex plots with Shakespearean undertones, and centers around a clan of gargoyles who turn into stone during daylight hours.  I always found this concept synonymous with vampires, although more tragic than demonic.

Our idea was to use characters from the show to create our own.  We have done this with several costumes in the past- using a concept for inspiration, then creating a costume that will fit into that story.  My husband wanted to be either the Magician (The Magus) or the Archmage… So I said why not both?  We created his look with an old hooded cape from a previous costume, added some gold and black fabric, and snagged a white beard from my brother’s Gandalf costume.  We tied the beard at the center and painted black around the eyes.  Under the cape he wore all black, and we belted it in the center.

My costume was a bit more time consuming, as I ended up doing the majority (OK, all) of the fabrication for both our costumes.  I had purchased a gray body suit in the past and I wanted to reuse it for SOMETHING.  That was certainly a factor in our choosing of “Gargoyles” for our 90’s cartoon costumes.  I also had some pre-made bat wings that were on sale after last Halloween, a set of devil horns, and some elf ears.  If you noticed, I like to save and reuse costume pieces from previous years! It’s both a challenge and a budget saver to figure out what you can make from things you already have. Next year we may even use the ears a 3rd time for a Legend of Zelda costume

Anyway I found some fabric that looked very similar in color to the body suit and wrapped it around the straps of the wings to make them blend in.  I rigged the wings to make them flappable and painted them to match the rest of my costume.  This was the most time-consuming step.  Out of an old braided belt I attached 2 scrap pieces of white cloth- 1 in front and 1 in back similar to Demona’s in the show.  I used the same fabric for the wing straps and rolled it into a snake.  I sewed the ends and seamed the center.

I had a little tail from the devil costume I got with the horns, so I snipped off the arrow-shaped end and attached it to the tail.  I then sewed the tail onto the belt.  Grey pumps completed the costume fabrication, so I painted my face, ears and horns, and sprayed my hair red with temporary hair color.  I had painted my bare hands with the same color, but it was WAY too messy and I left gray paint on everything I touched, so I removed it.

We hope you like our costumes and it reminds you of the simply wonderful memories of your childhood. 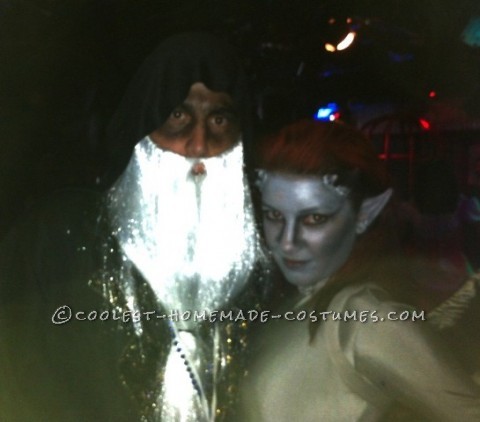 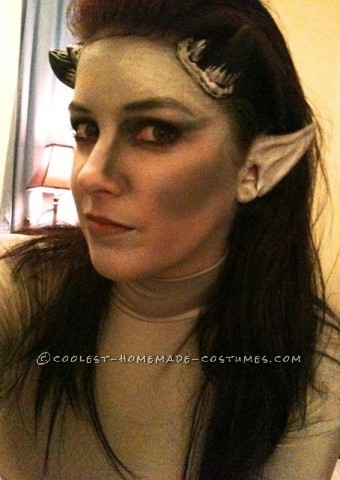