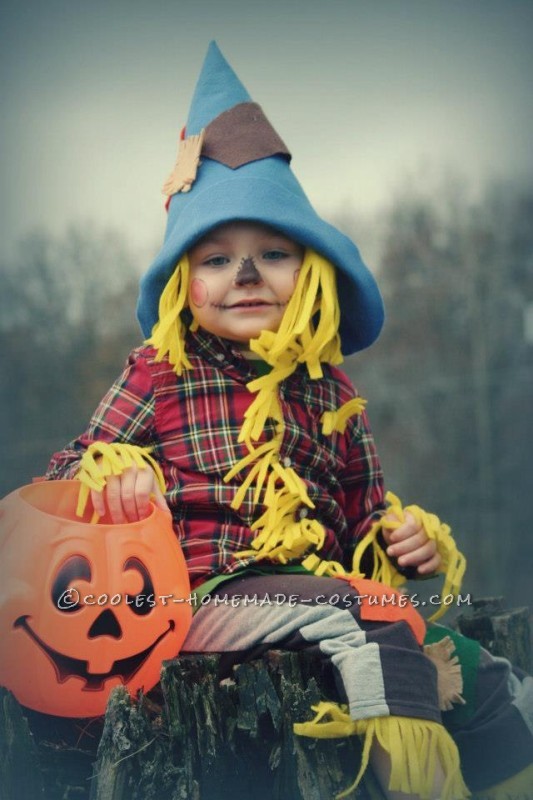 My son decided he wanted to be a scarecrow for Halloween.  On a whim, I went through his closet to see if he had anything suitable that would work for the shirt and pants, so I would not have to buy anything new.  I ended up with a plaid shirt that he was growing out of and a brown pair of sweatpants.  I knew I wanted to use some felt I had given to me for putting some patches on it to make it look raggedy.  My grandmother (a yard sale fanantic) had given me a HUGE bag of felt pieces she had found for “next-to-nothing” at a sale.  As I was digging around for different colors, I realized that there was a large amount of bright yellow felt.  I then had the brilliant thought to use that as the scarecrow’s straw.  Let me just say…..I DO NOT SEW!  LOL  In fact, even the buttons at my house are sewed on by my husband!  I am so bad at sewing that I once failed Home Ec because I put the bobbin in the machine upside down, and my teacher could not get it to come out!  I think she was even more mad since they were brand new machines, and she seemed to think I did it on purpose.  No, I was just not meant to sew!

Anyways, my biggest challenge was to create the entire costume with out a needle and thread. This is when I discovered Fabric Fusion.  It is a sticky tape and sheets you can use to fuse fabrics together.  It is  no sew, permanent, and washable.  I used both the sheets and the tape to make the costume.

Step One: The first thing I did was to cut out some rectangles and triangles of different felt colors.  I applied those to various parts of the costume as patches.  I used the sitcky sheets cut to size to adhere them.

Step Two: I then cut 4-5 inch strips of the yellow felt for the straw.  I applied these using the tape to the cuffs of the shirt and pants as well as the front of the shirt at the seam where it buttoned.  After they were attached, I cut them in thin strips to resemble the straw.

Step Three: My biggest challenge was a hat.  I ended up using a large trangle of fabric and fouling it into a cone shape.  I adhered pathes to it and folded up the bottom for a brim.  I also used the strips of yellow on the underside for straw “hair.”  LOL  It made my boy look a bit girly, but, hey, he is still little, so I can get away with it, right?!

I don’t like to brag, but I really could not believe how cute it turned out.  My husband came home and saw it, and asked me where I bought it.  I told him I made it nad he could not  believe it,  He was like, “You can’t sew!”  Haha! But I am good with tape!  I got the same reaction when he wore his costume to pre-school.

I was so afraid that when he started to play games and run around at school that it would begin to fall apart, but the product did it’s job and everything held tight.  The only “probem” was the straw on the cuffs of his pants was a bit long and he would occasionally step on it and peices would rip off.  It was funny, though, because everyone could tell where the scarecrow had been and joked about him losing his straw!  He ran around collecting it and sticking it in his pocket!

Oh, and I forgot to mention his makeup….the first time I applied it, I went a bit overboard.  I did big blue trangles over his eyes and a huge seamed mouth.  He took one look in the mirror and started bawling!  It scared him!  I removed it all, and did a simple mouth, nose and circle rosey cheeks. It was so adorable!

We did not win any contests, but also did not enter any until now.  I did pin it on Pinterest and it has gotten a ton of repins, though.  I was actually surprised by this, which made me consider entering it in a contest. 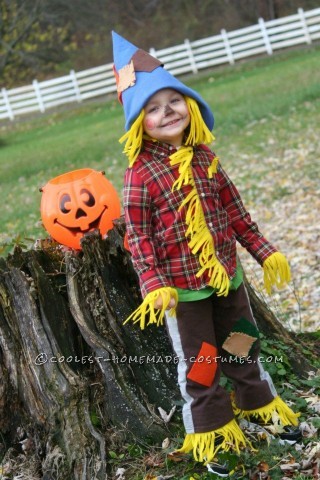