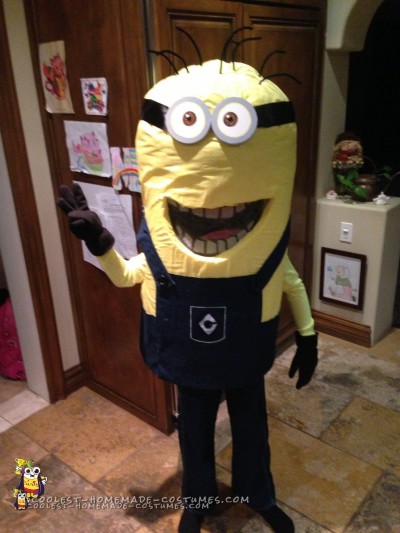 Two years ago, my then nine year-old, hyped up on the Despicable Me Fanfare, requested a minion as her costume of choice! Hahahaha!! A minion? Perfect.  Keep in mind, I don’t sew!

I exhausted my online search for minion costume ideas and came up empty. I swear my children try to challenge me more and more every year and I’m always up for a challenge!! ;) So..it’s gotta be good!!

I started Minion (#1) with the idea of inflating a beach ball, attaching a beanie to it for her head and securing poster board with armholes and a big minion mouth for her to see out of. Considering I don’t sew, I had the brilliant idea of using homemade papermache to cover my cute template. I spent hours in the garage each night adding layers to my papermâché mess, allowing it to dry in the garage that night and in the sun the next day.

All said, with a final layer of paper towels used for the mâché, it was looking great, well-shaped and all white, ready for paint!! Well, my brilliance was ever-so-brief. The beach ball which was to sit atop her head, popped! No worries though, I can shove another one up there. Problem solved!! :) And then I picked it up. That thing must’ve weighed 45 lbs!

Haha, realizing Minion #1 was a bust, I still tried to see how the general shape and size looked on her. Well, that was scarier than any monster homemade Halloween costume! It was pretty much a body cast on the poor thing, which I actually feared I’d have to cut off of her!! Childhood-trauma aside, my plans for Minion #2 (and final, thankfully) came to life.

I used the same concept as before though I attached a foam ring (with a hat tucked inside) to the top sheet of foam encasing her body. On top of that, I placed a half foam ball (all adhered with a glue gun), added some stuffing around for the shape and covered it with yellow and denim fabrics and details. I used a sheet of black mesh for his mouth (and her face) and painted some circle shaped boxes for the eyes. I put her in overalls and a yellow long-sleeved turtleneck, added some gloves I purchases and covered her shoes with black felt and voila! My little Minion came to life!!

She was the hit of the night and that costume stood so tall, she was larger than her 13 year old brother. Haha!!   Minion?!! Hmph..no prob!! I thought this was supposed to be a challenge, kid?? ;)