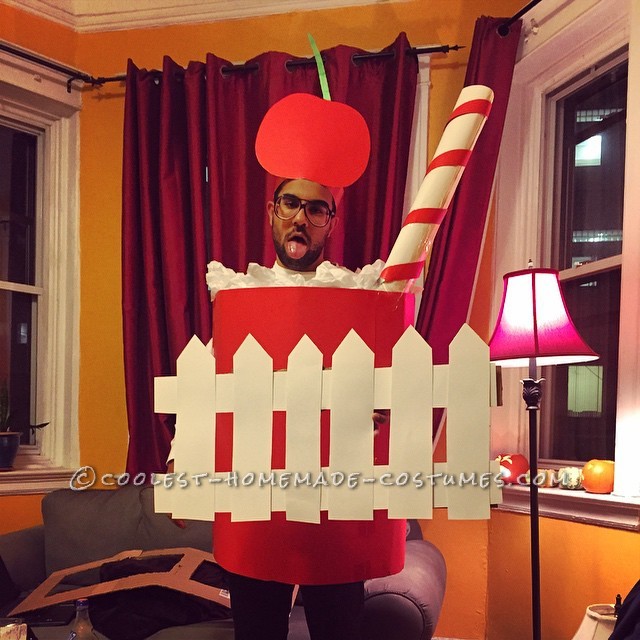 This year, I really wanted to go all out and come up with a super original costume that no one else would have. The only way to do that was to make something myself. I was struggling all month and could not think of any ideas worthy for me to attempt. I turned to my friends for ideas and they just gave me a bunch of stupid suggestions that were not funny or cool. I was going to go to one of the biggest parties in the city and I needed something that would stand out. So one day, while I was showering (I do all my best thinking in the shower), it came to me. I would go as a milkshake and hold a fence. If you do not understand, that is fine. I wanted a costume that was funny but that required people to still think a little bit. My costume refers to the song “Milkshake” by Kelis. It is a very famous song and I knew everyone in my age group knew the lyrics “My milkshake brings all the boys to the yard”.

So I decided to do a literal interpretation of those lyrics and be the milkshake and hold a fence. It was a real struggle making the costume itself. I did it over the course of three days with the help of some very good friends that did exactly what I told them. I used an old cardboard box I got from work and just bought Bristol boards and tape. Spent a total of $7 on my costume, which I am pretty happy about considering it turned out pretty well. I was surprised at how well people reacted. I was stopped in the streets many times while I made my way to the party. Everyone got the joke and it was a huge success. Even though my friends doubted the idea at first, I am glad I chose to go through with it because it was probably the best original costume of the night.