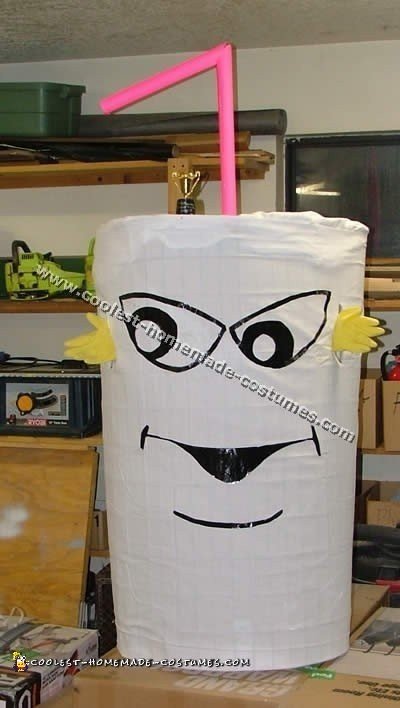 I made this Master Shake costume with some fence for the frame (3×6″ chicken wire is too flimsy) more fence as a top and a sheet wrapped around that and a cardboard tube with construction paper for the straw (attached the tube with bailing wire).

I drew the face on butcher paper, spray painted it black, cut it out and rubber glued it to the sheet. The gloves were dishwashing gloves held onto the frame with binder clips with cardboard cutouts inside from some old gloves to keep them sticking out. I used a dremel tool to cut a hole for my head and hands and then let the costume top rest on my shoulders. Hard to get around in but it works pretty well.

If I had to do this Master Shake over again I’d put some foam rubber on the top for a “lid” and attach a string to the bottom or to a dowel glued to it. That way I could furrow my brow at people.

For my Master Shake costume, I bought two hula-hoops, the color does not matter. It doesn’t even matter if they match. What does matter is that one is big and one is small. Then I bought two pieces of white cloth. Each piece is one half of the shake. I made one piece fit exactly half of the big hoop.

Then, I wrapped the bottom of that piece of cloth around the smaller hoop. I made marks where the cloth would warp around the hoop exactly halfway. I put the cloth in a line from where the small hoop was halfway covered to where the large hoop was halfway covered. This piece of cloth should make half of the milkshake. Cut the second piece to match this one exactly. Sew the ends of the pieces of cloth together. Draw the face on based on a picture of Master Shake. The entire effect is based on how well the face turns out.

Sew the top around the big hoop and the bottom around the small hoop. Use elastic, dow rod, or something sturdy to make supports across the big hoops. These will sit on your shoulders and make the Master Shake costume hang over you.

The straw is a hat made of pink/purple poster board.

I wanted to make all 3 of the Aqua teen characters for a Halloween costume contest this year but only had enough time for Master Shake.

I started by making the frame out of 3/8″ .070″ wall steel tubing. It stands 6’6″ tall with a 5’2″ ring for the top and a 3’3″ ring for the bottom. It is completely welded solid so transportation and getting it inside buildings is a chore.

I also made a cross that extends across the top loop and has a 4″ steel mount on top that attached to the straw. After I made the frame I painted it white then started the covering process. I used 2 8’x12′ white painters’ drop cloths for the outer cover. I started at the bottom and went 1′ at a time and stretched it to the top. It is completely sealed around so you have to get in through the bottom.

Next I made the straw. I used 4″ air conditioner duct then tack welded it together and painted it pink. It screws down to the mount on the top of the cup.

I made the eyes the mouth and chin of Master Shake. They are made from poster board. The pupil of the eye is made of a black mesh fabric that you can see through. I designed the whole Master Shake costume so that the eye holes are the same height as me and the entire costume is to scale as closely as could be recreated.

Next came the hands and they are made of 1″ thick foam painted yellow. Hot glue holds the eyes mouth and hands on.

I used chicken wire to shape the skeleton of this Master Shake costume and then used white rolls of construction paper to rap around it. I used two pieces of string tied to the chicken wire to hold it on to my body (kind of like a backpack). I bought white gloves and painted them yellow for the hands. For the straw I took two pieces of pink cardboard and angled them to make the bend. I then stapled it to a wool cap to keep it on. Total Spent: $45

This is a cardboard circle. We had some packing Styrofoam that was shaped to hold a small CD player. It’s “head shaped” only cut to fit.

Glue the scrap material to it and hot-glue it to the cardboard (bottom) so it fits your head and ties under your chin (it’s something like 3 yards of white material). I laid it flat and cut the Master Shake eyeholes. On the backside of the holes I glued a more sheer material. I flipped it back over, set it on wax paper and painted the shape of the pupils and outlined the Master Shake eyes (hiding the glue that got through).

I painted the rest with wax paper backing too. I hot glued it to the cardboard (top). I sewed white pipe cleaner in to make like a wired hem so it would taper in a circle.

The Master Shake straw is made out of felt. I drew on 2 pieces a “profile” of the straw. It’s made of 3 parts- bottom, bend, top. I stuffed all 3 and sewed them together (I got lucky, that was hard). I ran a coat hanger through making a “stand” on the bottom which I duct taped to the cardboard top and “stabilized” it by gluing additional cardboard around it.

I sewed the hands out of felt and sewed them on (they just hang, there are arm holes beneath). There’s a seam on each side I loosely sewed up. Then I covered the cardboard top with blue felt beginning where the cup lid starts to the straw and repeated all the way around.