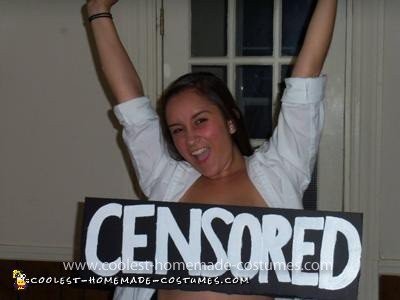 I actually got this idea to Make Your Own Girls Gone Wild Costume from this very same site! I saw some pictures of a few girls who had tried the whole girls gone wild idea and I was sold! This was probably the easiest and cheapest costume I’ve ever had and it was a hit with everyone downtown! The only things I needed to actually purchase were the board, white paint and velcro strips.

I went to Wal-Mart and got a thick black board, a small bottle of white paint and a pack of velcro strips, all for about seven dollars. The black board was a bit big and square so I cut it to a rectangle shape to make it look like an actual censor bar. Then I traced out the word censored in all capital letters and painted them in with the white paint. Luckily I had a black tube top bra (if you don’t have one, the most they are about ten dollars) and I attached three separate Velcro patches to the bra. Then I attached the opposite sides of the Velcro patches to the board and I had my censored sign!

I had a white button up shirt that I wore because it was a bit chilly and to cover up the back of my bra, but even if I did not have the shirt, the back of the bra would have just looked like a continuation of the sign. I went downtown and all my friends were blown away by how real the sign looked and I had a ton of people ask to take a picture with me. BEST COSTUME EVER! Now that I have moved to a new place, I’m thinking about bringing out the censored sign again and showing it off to my new friends here! 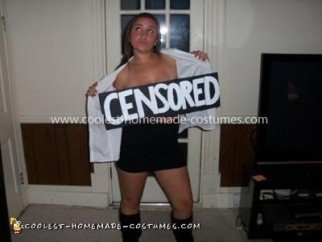