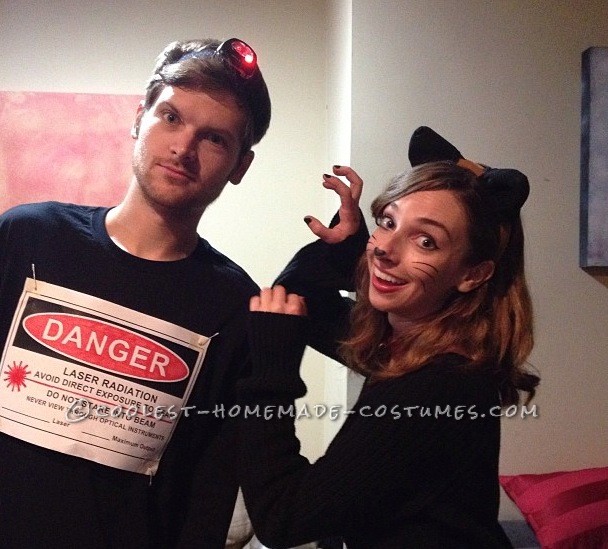 We got invited to a Halloween party an hour before we needed to be there and as usual did not have costumes prepared!

Heather decided to go as a black cat. She converted her lion ears from the previous year’s Cowardly Lioness costume into cat ears. She did so by safety pinning them near the top of each ear to make them pointy, then wrapping small black socks around them. She made a tail by removing one pant leg off a pair of leggings and stuffing the leg that was still attached to the waist band with batting (pillow fluff). The waist band was covered by her black sweater and she wore another pair of black leggings (she has many). Heather then painted on a nose, whiskers, and cat eyes with black eye liner.

Mikael decided a unique and funny match to Heather’s costume was a laser pointer! He wore all black and safety pinned a printed out “Danger: Laser Radiation” sign from the internet, which he colored with red marker. The final touch was a camping headlamp set on red mode for the actual laser. Easy as that!

We were a huge hit at the party! As well as Reddit and Funny or Die the next day. Heather had a great time meowing and pawing at Mikael-the-laser-light all night. Most importantly, both costumes were incredibly easy to make and comfortable!