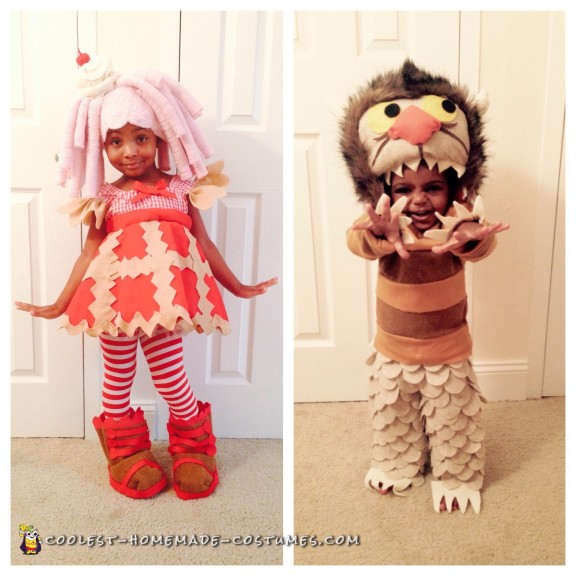 Okay, So I have always been super crafty, I don’t consider myself right or left-handed but “Craft Handed” instead. Last year I decided, what the heck, I should make my kids’ their Halloween costumes myself! So I did.

I have no sewing machine and no funds for a fabric store so with my very trusty hot glue gun and stash of felt I got to work making my son one of the monsters from the classic children’s book “Where the Wild Things Are”. He was the monster with the striped legs and furry head. I wasn’t quite sure how I was going to tackle the task, I had never made a costume before but I had all these ideas in my head about how to construct it so I just dove right in.

I started out building on an old pair of pants and an old hoodie of his and magic happened from there. Constant reference of the book illustrations helped tremendously with how it looked. It actually was a hit people thought it was hilarious and knew exactly who he was portraying.

The hardest part was the head. I decided to build a face on the hood of the sweater that way my son would be able to take it on and off easily with no fuss. It was trial and error but so much fun to put together.

Now my daughter wanted to be a doll from her toy box called a Lala Loopsy Doll. I also made this costume from felt and hot glue because after completing my sons costume I was on a roll and nothing could stop me. I referenced her doll and was able to build the costume pretty quickly.

The trickiest stinking part about her costume was making the dress look full and A-Lined. The felt was heavy and hung straight down so I made my own “support beams” or ribbing, out of gluing pip cleaners and straws on the underside/inside of the skirt.

On the outside the costume was fabulous but the craziness on the underside was a bit ugly. My enginuity ended up working out. The wig was supposed to look like a rag dolls head of yarn. I had to build felt tubes, stuff them with cotton, and wrap them with yarn to get the dramatic look the doll has.

The “hair” was built on an old pair of ballet tights that I cut into a stocking cap. All the yarn “hair” was glued to position on top. Now once her costume was completed people squealed at it’s awesomeness. I was pretty proud of it myself.

This year, I had the focus of a lion ready to attack its prey. My son (now nearly 3 years old) has an obsession with the book “Corduroy” so turning him into an adorable stuffed teddy was pie. I built his costume with out the inner shell of actual clothing. It’s completely felt.

The overalls were may favorite part because I had to make them look like actual corduroy material so I tediously sat and cut skinny little strips and strips of felt and then glued them down on the felt overalls. The work was painstaking and rather boring but that extra detail really pulled the look together. It’s just so cute!!

My daughter begged to be yet another Lala Loopsy Doll this year but she is the cheerleader version this time around. I’d have to say making the wig was my favorite/most troublesome part. Funny thing is, I ran out of cotton stuffing to fill it with (helps to make it look like an oversized head), so I had to cut up an of pillow case and ball up those pieces of fabric to stuff the wig with instead.

I tell you, if people could see what actually goes into my costumes to make them look the way they do they would laugh! But, again she loves it and I do too!

To sum it all up, my son’s costume cost me all of $7 this year and last year, and my daughter’s cost me $12 last year and $15 this year in felt material and hot glue. Winning! Plus they are keepsakes and conversation pieces and definitely one-of-a-kind. Their happy faces made all the burned fingertips worth it. Happy DIYing, crafters! 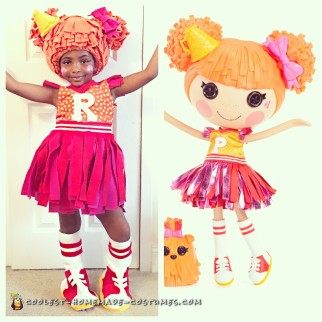 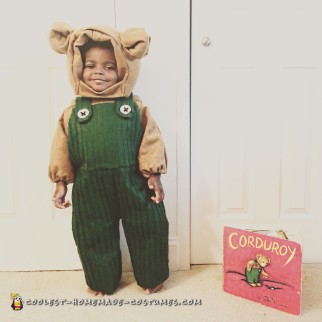