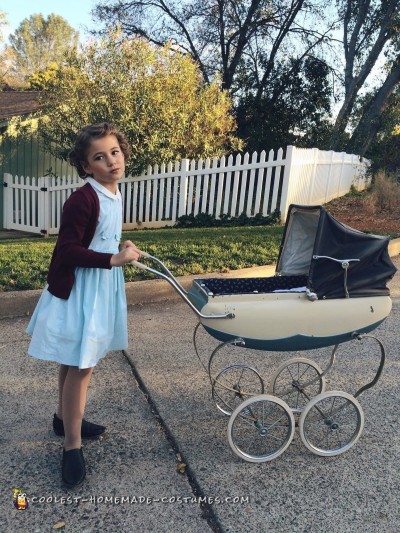 Meirabel, who is five years old, came up with the idea of being Jenny from Call the Midwife as we were watching the show one day about a month ago. But the greatness did not stop there; she also had a hand in every decision moving forward with the outfit. The Dress is an eBay find for seven dollars, the cardigan is a three dollars find from a thrift store, and the carriage is a fronts really vintage carriage that their family has had for over fourty years.

Total cost of the outfit was ten dollars and Meirabel was the one that wanted it to be that way. As the outfit was coming together Meirabel wanted to make sure that everything was perfect, she took her time and choose which shoes to where changing them a few time, and wanted her heir to look just like Midwife Jenny as well. She wanted her hair in curlers and knew that was the look the Jenny in the show had – and she was right.

Tonight was the night that we debuted the outfit, and the reaction was amazing. Not only did people who knew the show even slightly know who she was without even asking, the people who did not know about the show still got the idea and thought the outfit was amazing – all of them said that it needed to be entered into a contest, and we agreed.

The whole night Meirabel stayed in character and played her role well as Midwife Jenny, if the actress from the show would have seen her, I am sure she would of been proud. This outfit means a lot to Meirabel, and she is very proud of the work that she, and her family and friends put into it – we hope you fell the same. Thank you for you time – and best of luck to everyone. 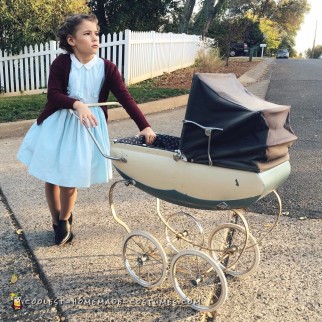 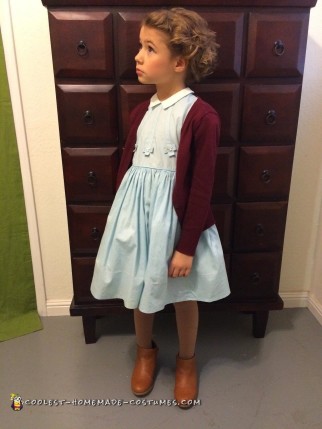