I made this costume because I have always been a fan of Pokemon. Dialga, a legendary Pokemon, is one of my favorites, so I decided to make what I would call armor of the Pokemon.

The first thing I made was the chest piece. My big sister helped me draw out the shape on cardboard and I cut it out. I then had to papier mache it, and wait for it to dry. The next day, I had to paint the whole thing light blue. When the paint was dry, I painted some blue lines on it to give it more detail. Then made a fake gem out of a flaky piece of floral foam, which my sister helped carve. I papier mached it then painted it dark blue. When it was dry, I glued it to the front piece. To keep the whole chest piece on me, I glued an elastic band on the back.

The next thing I made was the back piece.  Like the chest piece, I cut the shape of it out of cardboard. Then I papier mached it. The next day, when the piece was dry, I painted it light blue. I also had to make these spikes that I duct taped to the piece. I also glued an elastic band to hold it on my back.

And lastly I made the head piece. Like everything else, I made the shape of this out of cardboard. Then I papier mached it so that I could paint it and so that it wouldn’t be so floppy. The next day I painted it light blue. I then glued an elastic band to hold it on my head like a mask.

Once my sister painted Dialga’s marks on my arms, my costume was complete. I worked on the costume for about seven days, but the costume actually took me about 8 hours to make. When I went trick or treating with my family, I got several compliments, even though I’m sure not very many people understood my costume. However, while trick or treating, the glue holding the elastic bands to my front and back piece didn’t hold very well, and I had to run home a couple of times so my dad could glue it back. Eventually we just stapled the bands, and it worked really well. Overall, I think this was a really good costume, especially since this was the first costume I’ve ever made. 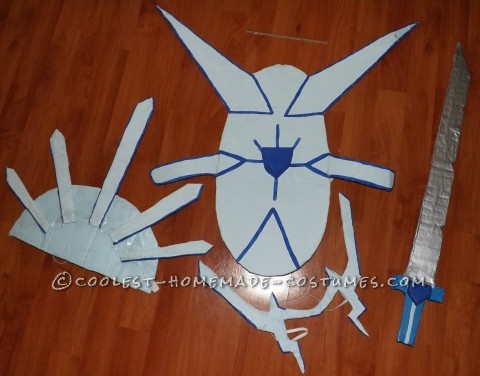