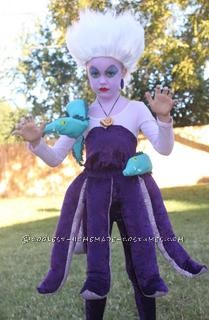 My daughter was dying to be Ursula the Sea Witch for Halloween this year.  After searching the web for a costume to buy, I realized that there wasn’t one out there.  So I decided to make it.  It was a bit overwhelming to come up with every aspect of the costume from scratch, but the end result was so worth it.

Next up, the tenticals.  Yikes!  I drew up a pattern and cut out six tentacles out of the purple velvet.  Once sewn, I stuffed them with poly-fil and then added some wire so that they were bendable.  I made a casing at the top of each tentacle and slid them onto a belt of my daughter’s.  My favorite part… Ursula’s eels, Flotsam and Jetsam.  I drew up a pattern for the eel and then cut two out, painted on their faces, sewed them up, stuffed and again put some wire inside.  Once they were made I used safety pins to attach them to Ursula.

To complete the outfit I found the shortest white wig I could and styled it upwards to resemble her hair.  Accessorized it with the infamous golden shell necklace and purple shell earrings.  This costume was so much fun to make and even more fun to watch my daughter enjoy Halloween in.  She absolutely loved every single minute she was wearing it. 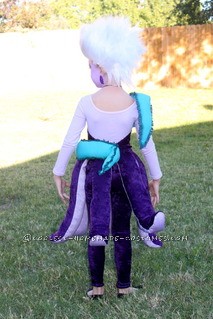