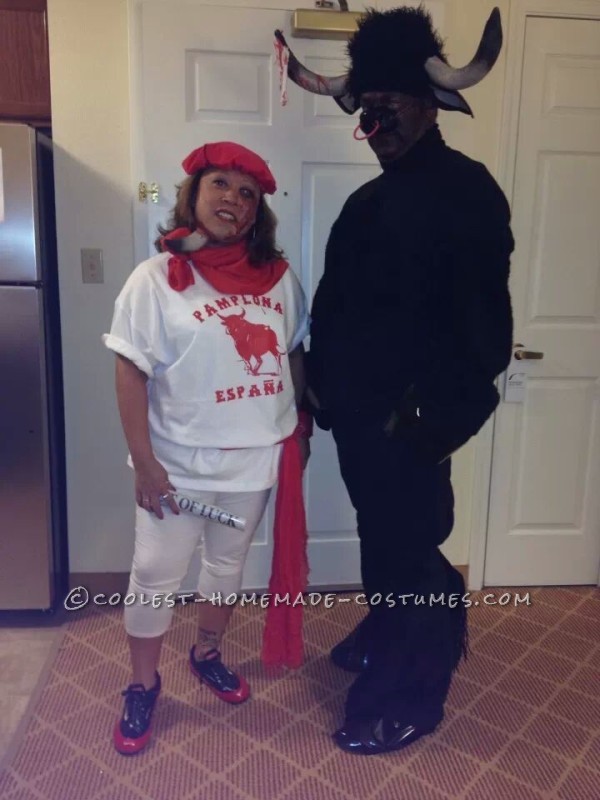 Halloween is the best time of the year! When else can you play dress up and go all out? This year my husband and I had three Halloween parties to attend and I was determined to wear a different costume to each party. This year we went as Running with the Bulls, the characters from the movie UP and Day of the Dead. This entry is for Running with the Bulls. We could not take more than a few steps without someone asking to take our picture. Everyone loved our costumes, this was one of my favorite.

Running with the Bulls: My husband was the Bull and I was the runner that didn’t quite make it. My costume was fairly easy, I ordered a Pamplona t-shirt, used a red scarf for a sash, found a red scarf and a red beanie at the local thrift store. I wore white pants and running shoes and I carried a rolled up newspaper, which happened to have the headline “OUT OF LUCK,”  how perfect!

My make up was done with layering liquid latex and tissues to make my wound on my face. I also used spirit gum and liquid latex to add a Bull horn protruding from my jaw. I made the Bull horn using a Styrofoam circle and cut it, then shaped it like a horn. Then I painted it to look like a Bull horn. I popped in one red contact lens on the injured side, added some fake blood and that completed my costume.

Making the Bull took a little more work. I started with a black fur hat that I received when I did The Warrior Dash obstacle race. I removed the horns that came with the hat because they didn’t look real enough. I used another Styrofoam circle. Cut it in half and shaped them to look like horns, then painted them using a tan and black spray paint, then added a torn t- shirt with blood to one of the horns to make it look like this Bull had gored before.

I used tan and black felt to make the ears. I found a pig nose at the costume store and painted it black, then added a red glow bracelet through the nose. For the Bull costume, I started with basic black sweat pants and black turtle neck. I made four black furry leg warmers (one set for the arms and one set for the legs), I added a shinny material at the bottoms for the hooves and he wore black gloves. I also added a large fur patch to the front and back of the turtle neck. For the tail, I used a black panther tail from the costume shop and added black yarn to end. Then painted his face black.

This was not a difficult costume to make, but it was one of my favorites!