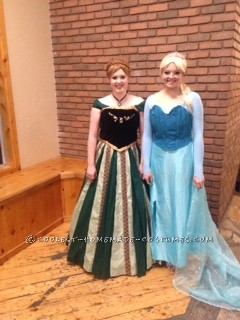 Before the movie ‘Frozen’ even came out, we knew we wanted to be Anna and Elsa for Halloween the following year. We would like to note that this was before Frozen became popular. We spent many hours online comparing dress patterns, fabrics, and materials as there was no preplanned design available at this time. Neither of us had much sewing experience, so naturally we decided to start our sewing journey with an intricate, corseted bodice. As time went on, we started to feel we were in over our heads. We tried to get some help from a woman we knew who made costumes, but she said the pattern was too confusing. So we decided we would just figure it out on our own.

We did a couple of calculations and whipped up some ratios. We also figured out how to customize the generic pattern into extremely accurate representations of Anna and Elsa’s dresses. We spent many hours online looking at the most minute details, down to the patterns, textures, and embellishments of each dress. We wanted these dresses to be perfect. We figured if we were going to put all this time and money in it, we better do it right. Slowly, piece by piece, the costumes began coming together. Then, we realized that we had miscalculated the amount of ribbon needed for the panels on the skirt of Anna’s coronation dress. After several repeated trips to the fabric store and considerably lighter wallets, we finally had enough ribbon to complete the dress. While one of us was busy sewing the ribbon on, the other was outside glitter blasting the bodice of Elsa’s dress.

The top of Elsa’s dress had been particularly problematic because earlier, in order to put the design on the sleeves, the top of the dress had to be worn while the other person carefully tried to put the designs on. However, glitter glue takes several hours to dry, resulting in “Elsa” having to hold her arms up for several hours. After about forty-five minutes, “Elsa” had had enough of this and decided to put her arms in the freezer, hoping the cold air would help it dry faster. Afterall, the cold never bothered her anyway. When, her hands got too frozen, we decided it was good enough and carefully hung it up to dry.

Finally, after sewing ten hours straight the Saturday before Halloween, the costumes were completed. We wore them to a Halloween dance, and the moment we walked in the door, everyone looked up and gasped. Heads turned everywhere we walked, and several times through out the evening, random people came up to us and asked if they could take a picture with us. Apparently they thought we really were royal. 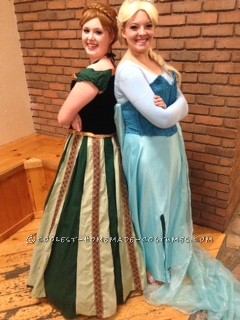 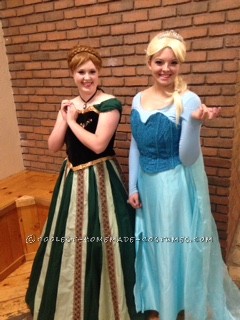 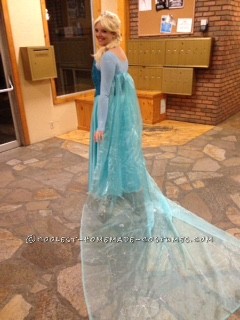 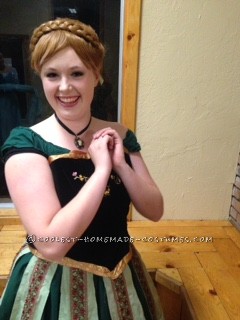