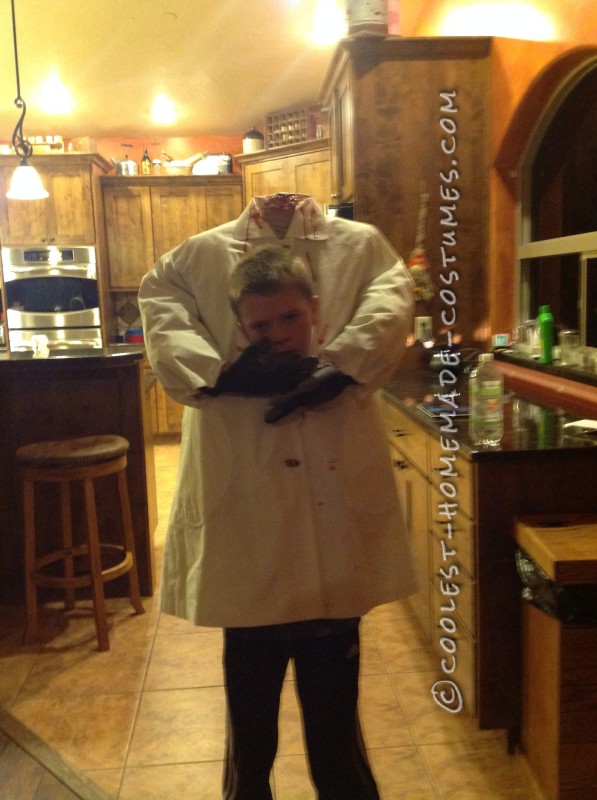 My son and I had so much fun creating the headless look! First we went to our local thrift store and bought a long trench coat. We love hanging out in the thrift store. Never know what you will find! We then taped a box on top of a backpack. When we make costumes you can never use too much duct tape. The box became his second set of shoulders. Then we put the coat on over the box, and stuffed the arms and shoulder area to look as real as possible.

We then found a pair of gloves and stuffed them and attached them to the bottom of the sleeves on the coat. We then buttoned the coat around his head and pinned the gloves under his chin, so it looks like you are holding your own head. The neck look was the part we had to get the most creative in making. We actually had a lot of fake body parts that we use in our haunted house so we took one of the plastic feet and cut off the ankle. We then placed that plastic piece inside some dryer vent and stuffed with a little newspaper. We then spray painted it the skin and blood color and hot glued it to the top of our box. Once again you can never use too much hot glue.

We then added some fake blood on the coat and he was instantly headless! He won the scariest costume in his 5th grade class and was very excited about that. He also was excited to tell me that a complete stranger wanted to take a picture with him because he liked the costume so much. I think that might be the best compliment of all. We always have fun making cheap easy costumes and this might be one of our favorites! 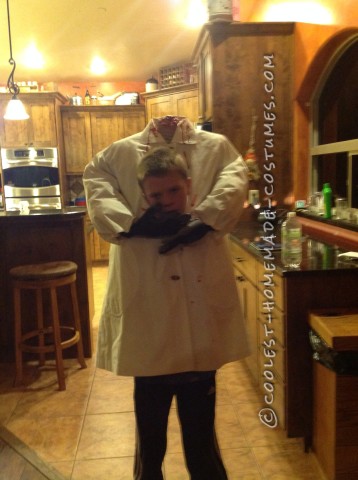