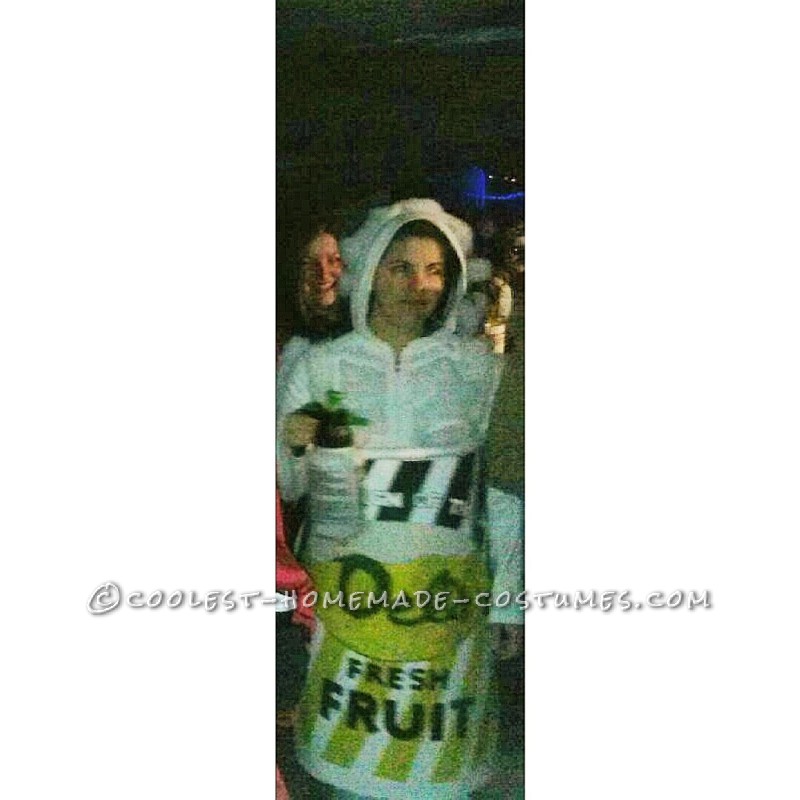 For those of you who have never had a Del’s lemonade or even heard of it let me explain.  Del’s lemonade is a frozen icee treat almost like an Italian shaved ice, but a million times better! The original flavor is lemon,  but now you can have it in a variety of flavors.  It is so popular and such an icon for Rhode Island that at Christmas time you can find Del’s lemonade Christmas tree ornaments at local gift shops.

I like to hand make my costumes every Halloween.  I try to come up with something that you would not find in any party or Halloween store.  In the past, I’ve made quite the variety of costumes Aayla Secura from Star Wars in which I dyed and stuffed panty hose to wear on my head as a headpiece and painting myself blue to covering up in fur to be Gizmo which I recycled last year so my boyfriend could dress up as Ylvis the Fox from what does the fox say.

This year I decided to go as a Del’s lemonade.  For this costume I used poster board for the base.  Then I used felt material for the stripes that I cut and secured to the poster board. Unfortunately I forgot to put something between the table and fabric and I ruined my table cutting the stripes.  I used fabric paint for the lettering and any detail work. I sewed fabric stuffed with pillow fluff for the lip of the cup. I wore a white sweat suit underneath the costume.  I covered that with pillow fluff and also added little lemon wedges to complete the look. I even painted my face white and attached some of the pillow fluff to my cheeks.  I also carried around a garden spray bottle filled with actual Del’s Lemonade to give people a spray sample.

Everyone that saw my costume loved it and a lot of pictures were taken.  This costume was really fun to make and wear. I won best costume at a couple Halloween parties.  At one I won sixty dollars and another one I won a plastic skeleton Emmy-type trophy statue which I proudly display in my living room.   Del’s lemonade is a big part of Rhode Island.  From children to adults,  just about everyone in Rhode Island has had a Del’s lemonade or two during the summer.