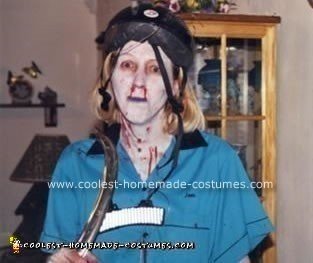 The movie “The Sixth Sense” from a few years back was the inspiration for my Dead Bicyclist Halloween Costume. It was in the scene where the little boy was in the car with his mother and they were stalled in traffic (a bicyclist had just been hit a few blocks up ahead). As the mother and son were sitting in the car waiting for the traffic to begin moving again, the little boy was having a conversation with his mother about how he could see dead people.

Just about then, the freshly hit “Dead Bicyclist” stuck her head into the window of the car, staring right at that little boy. It was just for a quick second or two that the bicyclist appeared but I knew at some point I was going to be a “Dead Bicyclist” for Halloween!

I rummaged through the house and even shopped a few thrift stores and local bicycle shops to gather materials/items for my costume. While visiting our local Salvation Army, I found a real authentic bicycle shirt with MY NAME already stitched on the front of the shirt. It had a really cool design on the back that advertised some bicycle racing bike (I think it was used in some competition) but anyways, what a coincidence to find it at the time!

I borrowed an old car tire from a neighbors garage, sprayed the tire tread with some black spray paint. I spread my shirt out on the patio and ran the tire over the shirt until you could see the treadmarks on the shirt. The marks wrapped around the sides and to the backside as well. I had some old 5 and 10 speed bicycles out in our shed so I took them apart. I wrapped some of the gears/wires around my head, neck, my body, around my legs, etc. I bent up a bicycle rim and slung it over my shoulder.

I carried the bicycle seat in my hand. With the help of some fake blood and white, chalky face paint, I was ready to start peddling. 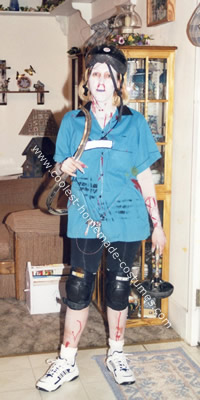