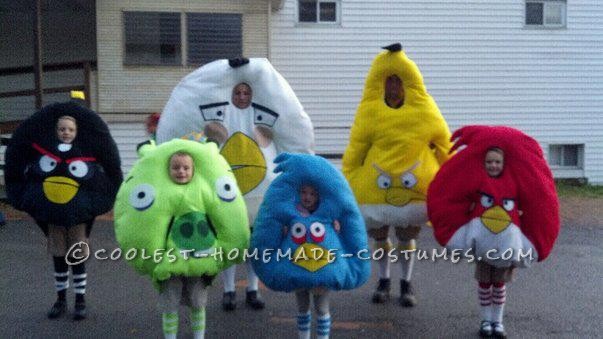 These Anrgy Birds costumes took hours and hours to make, but so worth it! It all started when my son, age 5, became obsessed with the Angry Birds game on my smartphone. He insisted I make him the pig costume “just to play in and he could knock it over by throwing random toys at it. Well, it was close enough to Halloween, and we always try to make a group theme of costumes to wear in our local parade as well as wear to other costume parties.

I asked my son (as well as my three daughters), if they would mind going as the “Angry Birds”. They went hysterical! They loved the idea! However, my son was a bit disappointed at first because he wanted his made the very next day and be allowed to play in it immediately. After making his pig costume, I realized how much time and effort went into making only one. I was convinced I wouldn’t get them all made in time! It took me about two weeks, and  the hours put in to making them seemed endless! There was NO WAY I was going to let my son “play” in it before actually wearing it in the parade!

The most difficult part of making the costumes was sewing around the face holes! I am not a seamstress by any means. I would have hot glued everything if I could, and I really wanted to hot glue around those circles in the worst way! However, I knew the hot glue chunks that would be around the face holes would not be comfortable to wear (or be very presentable for that matter), so I struggled with the sewing machine with the entire front piece of the costume already stuffed with all that batting! It was a chore, let me tell you!

The reaction from the crowd at the parade made everything worth it! People went crazy over our costumes! People couldn’t believe I made them myself, and as quickly as I did, especially when many who know me say I am the busiest person they know! Who needs sleep, right?  The matching socks and shorts were a hit as well and a great addition to the theme. However, we only took 3rd place in the parade that night, and many believe it was probably due to the fact that the costumes looked as if they were bought! I even heard a few people say the judges were asking each other what we were supposed to be! ARGH!

There were definitely disappointed people in the crowd, and I was quite disappointed as well. We were definitely the crowd favorite. The cheers and roars were priceless. I don’t regret the time and effort one bit! Super fun! Oh, and by the way, my son has been wearing his costume very frequently and getting plenty of play time in it! We even use them as big floor pillows!

2 thoughts on “Homemade Angry Birds Costumes so Great They Were Mistaken for Bought Costumes!”