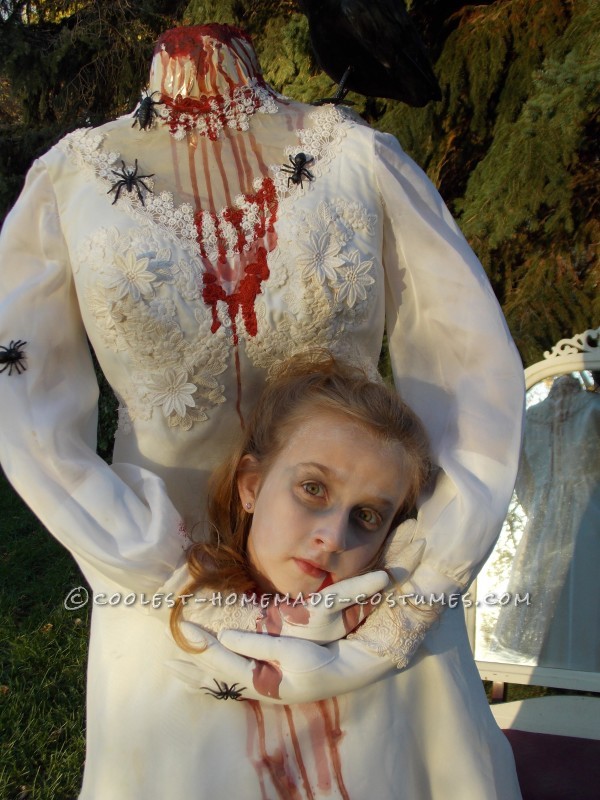 My nine year old daughter wanted to be something different for Halloween. We searched around online to come up with ideas and started to notice that we liked the idea of a headless costume. There are a number of headless brides costumes online, but we weren’t overly impressed with them for some reason or another. I said “Do you think we can do it better?”. And so it began! I found myself at Goodwill, digging through all the dresses to find the right one that would work. And I found it; with all it’s stains and lovely odor! Febreze is our friend! Ha, I was super ecstatic when I found a long pair of white gloves in a bin and they were only 50 cents! Woohoo! Then the real work began; trying to figure out how to build the body and keep it lightweight for her to wear it for trick or treating.

We dug up one of her old school backpacks that had holes in the bottom, perfect. I pondered and thought about what could work for the shoulders and neck and still not be too heavy, when I emptied my two liter bottle of Dr. Pepper.  Hmm, that might work. So I found two more bottles in my work area that I had not yet thrown away. Digging around some more in my work area, I came across some wood dowels that I had salvaged from the sides of an old crib I tore apart last year. The dowels fit right into the bottles and were long enough to go into the backpack. I ran out into the garage and there was this thin board, about 12″ x 16″ size. A few holes drilled and dowels screwed to the board and the board fit perfectly into the backpack.

I then wrapped the backpack all around with packing tape to keep the board in place and it all becomes one piece. I tapped the three plastic bottles together, with the middle one sticking up a bit higher to become the “neck”. The bottles wiggled around some, so I drilled a hole into each “shoulder” and attached the bottles to the dowels with washers and screws. What I had was a good solid upper torso! I was really impressed with myself because it came together so well and easily. I had my daughter try it on and she loved that she was as tall as me! I didn’t have any fabric or anything to use to cover the shoulders and neck to be the “skin”, so I started wrapping it with packing tape to make it all as smooth as possible. Two layers of almond colored spray paint later, it looked pretty good.

I slipped the dress over the the “torso” and it fit, IT FIT BEAUTIFULLY! My daughter had to put it on again so I could feel where her face was and to figure out where to cut the opening. I bought a cheap pair of panty hose, which I stuffed each leg for the arms, leaving the “panty” part to stuff for the chest and tying it shut (My daughter was embarrassed; “don’t make them too big” – she says!) I put the gloves on the ends of the arms and hand-stitched them to the head opening, carefully stitching each finger where I wanted it to stay. Digging through our Halloween totes, we found the bugs, spiders and owl to sew on.

We then took the costume outside to make it bloody. I used craft paint on the severed neck and my daughter dripped the store bought blood. We are so happy with the end result! It was my husband’s turn to take the kids trick or treating (we take turns each year so someone is always home to answer the door for trick or treaters). When they got home from their night of trick or treating, my daughter was so excited. She says “So many people went back to get their cameras to take my picture! That’s never happened before!”. There aren’t many contests to enter in our small rural area.

I did enter her in one Facebook contest. A photographer wanted to see Halloween costumes and he would pick his favorite. She won and we got to pick out one of his photography prints. Many of my Facebook friends said she was the winner of all they had seen. We are proud of our headless bride! :) (I tried to upload a picture of her entire costume from the front, but it won’t let me for some reason). 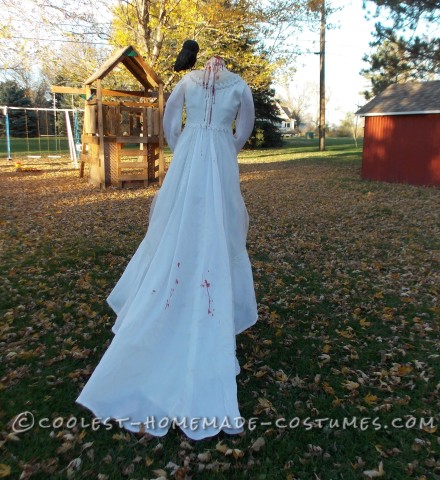 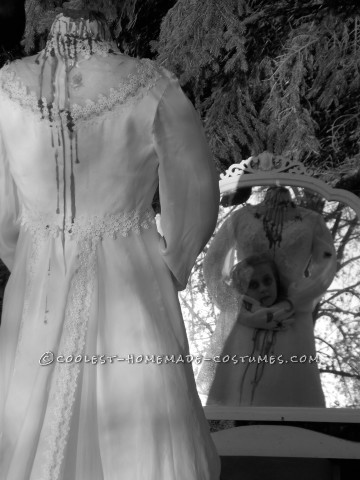