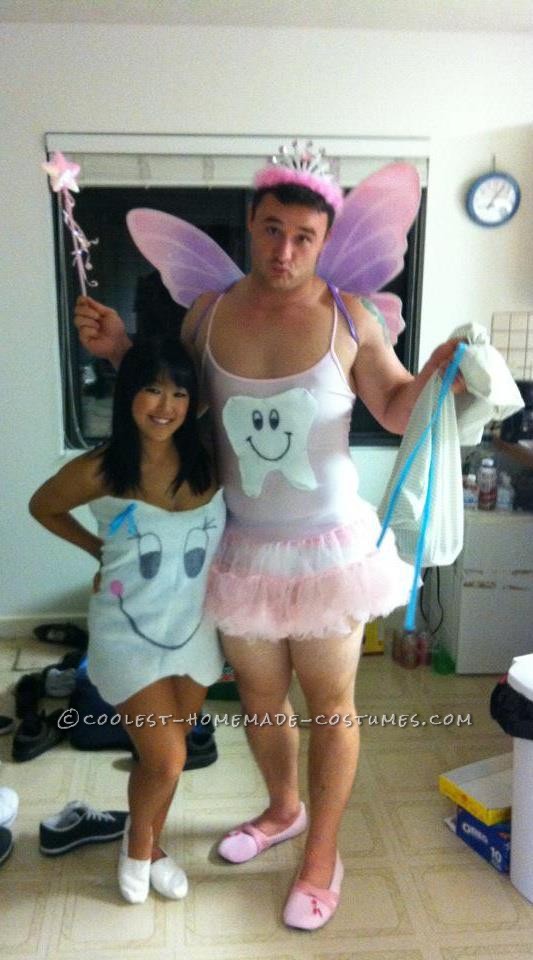 Just like every other Halloween, we weren’t sure what we were going to be. We wanted to do something out of the box since in Hawaii on Halloween everyone goes down to Waikiki and walks around to see all the crazy costumes. My fiancee got an idea and told me he wanted to be the Tooth Fairy. Awesome I thought…now what am I going to be. I finally decided I would be a tooth.

We went to Party City and got his women’s leotard, fairy wings, tiara, and wand. Then we went to Walmart and got the biggest pair of women’s slippers that we could find. Luckily they were pink and supporting breast cancer! Next we had to find my costume. I looked online….nothing cute for a tooth. So I went to Walmart again and got a few yards of felt. I wrapped it around my self, cut it in the shape of a tooth and kept it together with safety pins.

Afterwards it looked pretty boring so I decided to draw a face and put a bow on it to make it look more girly. Once mine was finished I looked at his costume and he just looked like a guy who wanted to dress up as a fairy….so I took some of the extra felt and cut out a tooth and pinned it to the front of him. Then to top it all off we got a pillow case to make that his bag where he kept all of the teeth. It ended up being a nice bag to hold all of our things (wallet, keys, phone, etc). We got a lot of crazy looks (especially on the way down to Waikiki since we only had mopeds). I would stop and stare too if I saw a 200 lbs guy in a fairy costume on a moped at 9 pm.

Everyone stopped to take our picture. It was a pretty awesome night!