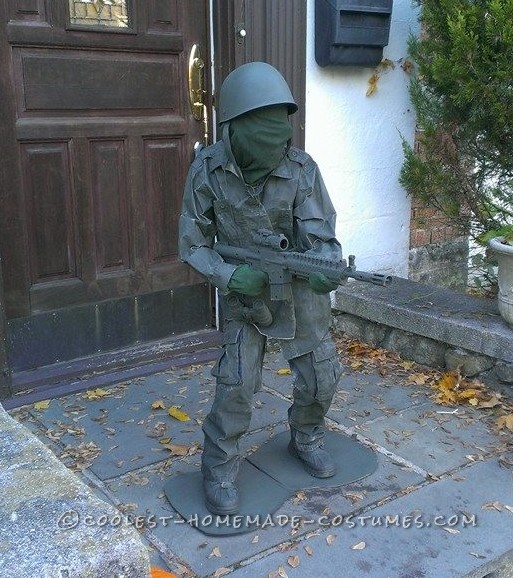 My 7 year old son decided he wanted to be a green plastic soldier, like the ones that come alive in the movie Toy Story.  He loved the way they hopped around on their platform, and then froze in place when a person came in the room. He wanted to do both of those actions, but luckily I convinced him that hopping around for trick-or-treating would be near impossible!

I collected most of the supplies I needed for the costume from his own closet and the dollar store. I used a military-style button-down shirt, old cargo pants, and a pair of hiking boots for his outfit.  I also used an old belt and got some soldier accessories from our local dollar store: a helmet, a gun, binoculars and a walkie-talkie to attach to his belt.  I bought a pair of green pantyhose to cover his face and hands, to achieve the look of a feature-less plastic man. I also got a piece of foamboard for his platform from the dollar store.

First, I cut the foam board in the shape of a kidney bean for the platform that the soldier stands on.  Next, I spray primed all the clothing and shoes.  The shirt and pants soaked up a lot of the primer.  I used 4 cans total. I was nervous that the pants could have used some more primer, but I didn’t want to make another trip to the store, so I just hoped for the best!   After letting the primer dry for a day, I then spray painted EVERYTHING the same color of camouflage green.  When I saw that one good coat of spray paint was doing a pretty  good job of covering the clothing, I was relieved! The plastic accessories, platform and even the shoes were a breeze to spray paint. Getting into all the nooks of the clothing was a challenge. Thank goodness I thought to use disposable gloves!  I let it all dry for another day, and then did some touch ups in some spots that looked like it needed it.  I was being a bit of a perfectionist and was annoyed that the green pantyhose was a different shade of green.  I decided to forgo worrying about him breathing in spray paint fumes, and lightly spray painted the pantyhose as well.  Those were still a slightly different shade of green even after spraying them, but it was better! I ended up using 3 cans of spray paint.

Once it was dry, it was VERY stiff.  I couldn’t button the shirt, so I hot glued some Velcro behind the buttons and over the button holes of the shirt.  I also hot glued his shoes onto the platform, and cut the platform in half so he could walk.  I glued his accessories to the belt and also added some Velcro to the belt because it was difficult to fasten it. I cut off the feet of the panyhose (for his gloves) and cut off the legs so there wasn’t too much extra fabric to fit under his helmet.

When he put it on, again the stiffness was a bit of an issue.  He said, “When I bend my arm, the shirt stabs me.  But that’s OK! I still love it!” And when he put the pantyhose over his head he said, “Paint dust is getting in my eyes. Can you get my swimming goggles for me to put under the mask?”  It was so funny how determined he was to make it work.  And it paid off, because the reactions he got were great! When I posted the picture on Facebook, a few people that he was a statue that I bought! Even in real life we got a lot of “Is that real??” and “Is there really a kid in there?”  Kids who knew the movie Toy Story loved it, but I think the grown men who played with little plastic soldiers as children loved it even more!

I love to craft and make things, and admittedly this costume was not as easy as I had anticipated (famous last words: how hard could it be to just spray paint everything?? Ugh, turns out kinda hard!) And although I knew it would be a little stiff, I also didn’t realize how hard it would be for him to move around.  But my son’s reaction made it all worth it!! In his mind, he was a movie character brought to life!