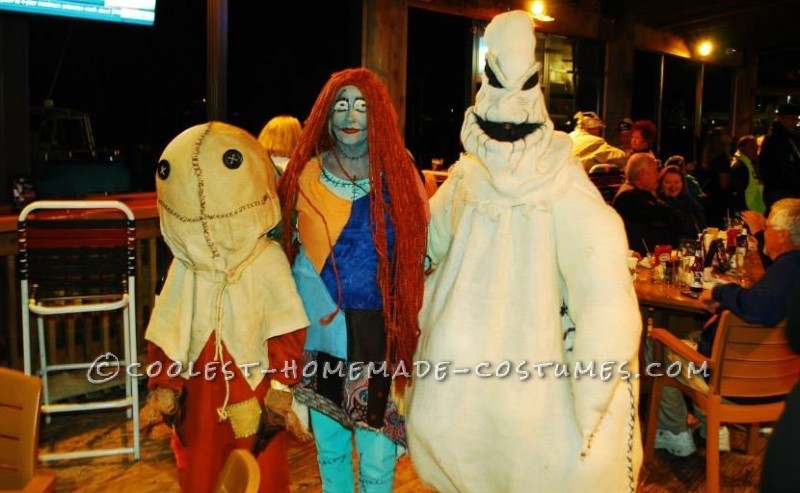 We always enjoy Halloween. This year we decided that we would do Nightmare Before Christmas and our son would be Sam from Trick r Treat

I did Oogie Boogie (my Husband, Troy) first, he is really just a large stuffed pillow from burlap. I sewed the arms on and put foot holes in the bottom. I also made shoe covers for my husband’s shoes. The head was made from wire wrapped with paper for the eyebrows and wire wrapped with pipe insulation for the mouth. My husband did the painting on the face and we sprayed him with glow-in-the-dark paint. The fatness came from balloons. I paid $10 for burlap and ten for the paint. This costume took about one week to complete.

My Sally costume was also easy just time consuming. I added a skirt to the bottom of a t-shirt. then I added scraps of material from my scrap pile. My legs were long underwear and my husband sprayed painted them while I was wearing them. Then he added the stitches. Not many men can say “I just sprayed my wife’s legs and then stitched them up!” The shirt for the arms just needed the stitching added. Troy did my makeup. This took about 1 1/2 hours. The wig, I made by adding yarn to a wig net one strand at a time. This was by far the most time consuming part of all of our costumes. Sally cost me about $15.

Sam, from Trick r Treat 2 (our son Ian): We used a large ball to form the head  I stitched the burlap and added the mouth, then used modge podge to harden the burlap head over the ball. I formed two large buttons for his eyes out of air dry clay. Ian had to wear an altered bike helmet to give the head the movement required. I made his sleeper from a drawing from his other PJs. I made a fake sucker for him to carry. I had to order the fleece. Ian’s costumes cost about $25.

We attended the annual party at our friends house and Oogie Boogie was the hit of the party. Troy stood in the same place for about two hours while being photographed. We have no idea how many times we were photographed the two times we were out. I had to close my eyes to give the effect of Sally’s eyes, so sometimes I would be still standing because I didn’t know they were done.

We had such a wonderful Halloween this year. I hope everyone else had as much fun. 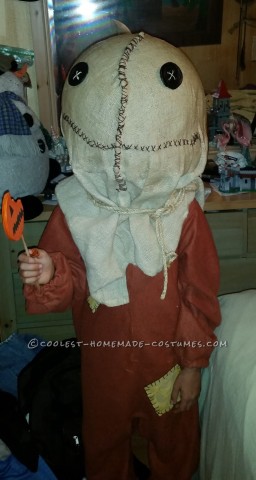 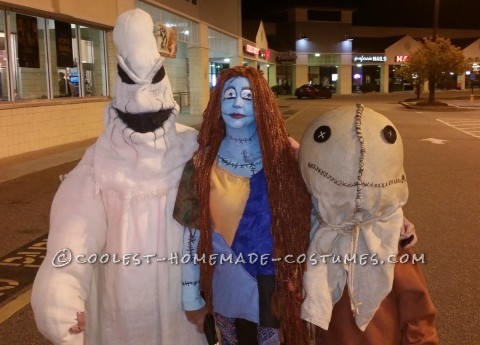 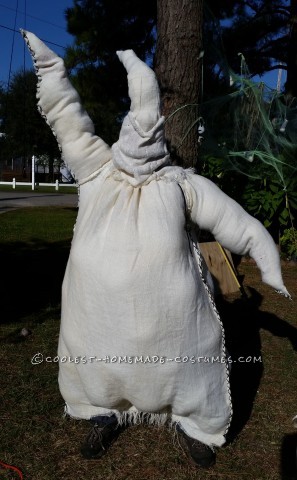 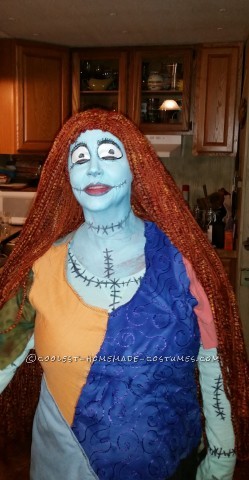