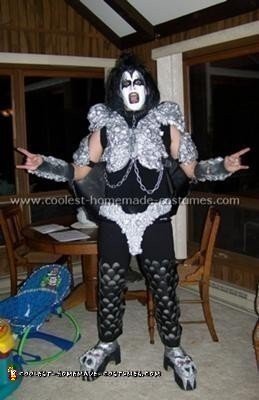 I built this Gene Simmons costume in 2005 as the climax to a 10 year long journey into rock stardom. Since I was 13 I have been Gene on Halloween, ironically that first time was the best costume by far before this one, but I never got pictures. (Since then I just painted my face and dreamt of the day when I would really go all-out.)

Finally came the Halloween when a friend and I were both invited to the same big party and he had been building a home-made Vader costume (super awesome) for months. So I got a set of lacrosse pads, pricey like $75. Then I covered them with the secret substance that I almost hesitate to name. “Great Stuff” spray-foam, it takes some practice to get it to behave and silver spray paint does not stick to it very well but it is seriously great stuff. The boots are an old pair of docs with lengths of 4X4 attached to the bottom with deck screws.

I then used a hammer and chisel to carve a sole and heel out of the wood (found wood chips in the couch for months). I coated the outside with more Great Stuff and body filler. I had to cut open the back of the boot down to the heel to get into them. The shins of the boots are cardboard covered with strips of fake black leather cut in scale shapes. The material for the scales was also made into the cape which I had to “sew” with hot glue. The gauntlets are just cardboard inside of black socks and you guessed it, more foam.

Tons of silver spray paint (I turned my shower into a spray-booth) and a few other little tweaks and it was done. As it says the materials came to about $150 but I also called out of work for five days to shop and build. Start to finish was six days.

This costume has been in more pictures with complete strangers than I can count and it earned first prize for most authentic at the Jubilee Restaurant Halloween party. 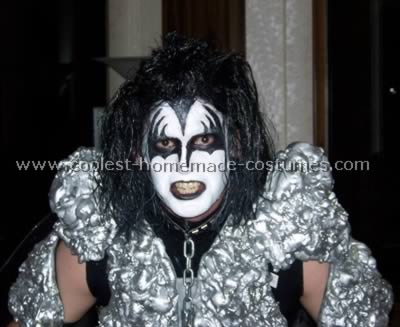 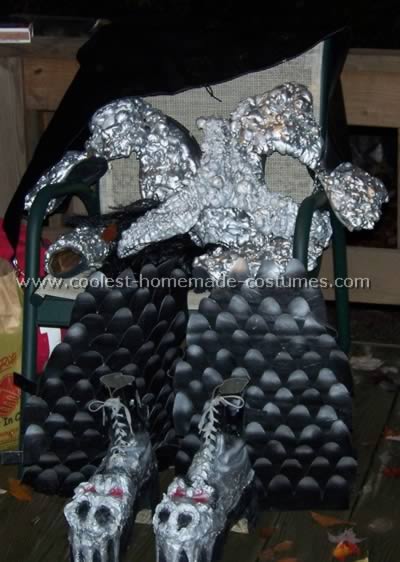