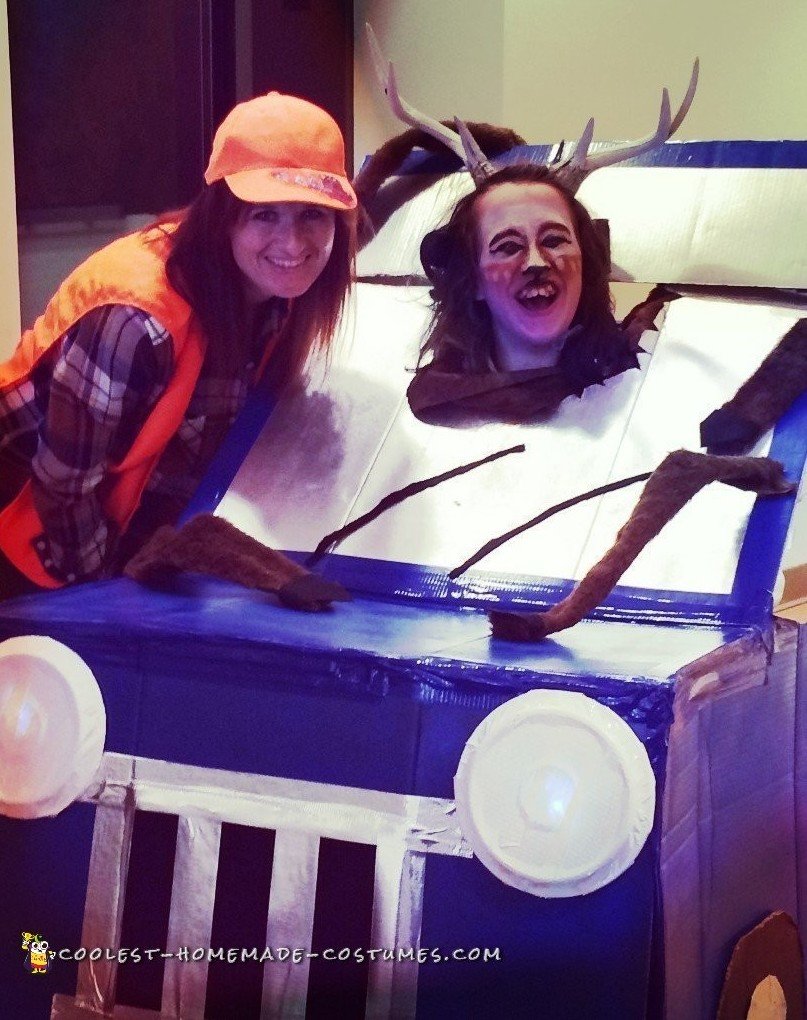 Every year we try to do something pretty cool and different for my daughter who has quadraplegic cerebral palsy and is in a power chair that she controls using her head. We came up with this funny wheelchair costume.

Her chair has a lot going on so working around it isn’t always easy but where there’s duct tape we’ll find a way. Last year we saw some amazing deer costumes. My daughter loved the make up. So we were sold on her being a deer but didn’t know quite how to get her power chair in the mix. And then it came to us to make her power chair look like a truck and have her head appear as if its going through the windshield.

Materials for our Funny Wheelchair Costume

Step one was to hoard cardboard. Step two was to head to a craft store and stock up on some spray paint and loads and loads of duct tape. Gotta love duct tape!!!!

I started by cutting the cardboard into pieces to cover the chair. After spray painting them we used her wheelchair tray as the main support and began to duct tape the “hood” of the car to the tray.

Once it was secured we taped the sides of the truck and the front to the hood. Then we reinforced it to the tray using the same color duct tape as the paint job. A bumper was made with silver duct tape. The wheels were cardboard painted black. The license plate was made with cardboard and white duct tape and a grill made with white and black duct tape.

The windshield was spray painted with a silver metallic color and trimmed with the matching duct tape from the body of the car. I cut out a jagged hole that fit around my daughters head and her head array. (This is what helps her hold her head up and allows her to drive chair and use her computer.) I had to cut another piece of cardboard and match affix it around her head array. This was in order to look like a full windshield and to fit around her.

Then, I took a glue gun and reinforced anything that looked like it might not hold. We glued black felt windshield wipers on and then I made headlight using plastic takeout lids, covered with white duct tape. I put a hole on either side of front of the truck for the lights. I used battery Halloween lights by stringing a few through each hole and then secured it to her wheelchair tray. Then I glued the lids over the light and voila…headlights.

Make-up was courtesy of YouTube and antlers via amazon. For a funny touch I bought some brown faux fur fabric cut it into 4 strips. I put a piece of a wire hanger in and glued black felt to make four legs. These I then either taped to the truck or used the end of the hanger to push through the cardboard.

My daughter was such trooper because in order for her not to move her arms (which is impossible for her given her CP) I actually held them down by her sides. Then I put her chest harness (which supports her upper body in wheelchair) over her arms effectively pinning them down by her sides. Was honestly the only way to keep them from moving and she assured me it didn’t hurt.  Oh, and for a bit of fun I bought an orange hunter vest and hat to sport next to her.

The final result was more than we could have hoped for. She loved it and all the attention from everyone who saw her. She received tons of complements on her homemade funny wheelchair costume, from parents and trick or treaters, especially all the older kids. Really awesome to remind people that all kids can love and enjoy Halloween and dressing up! 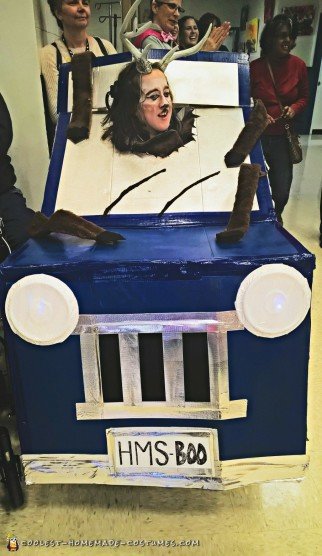 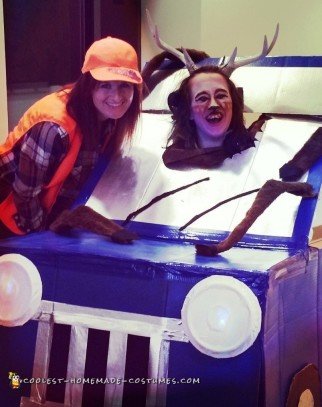