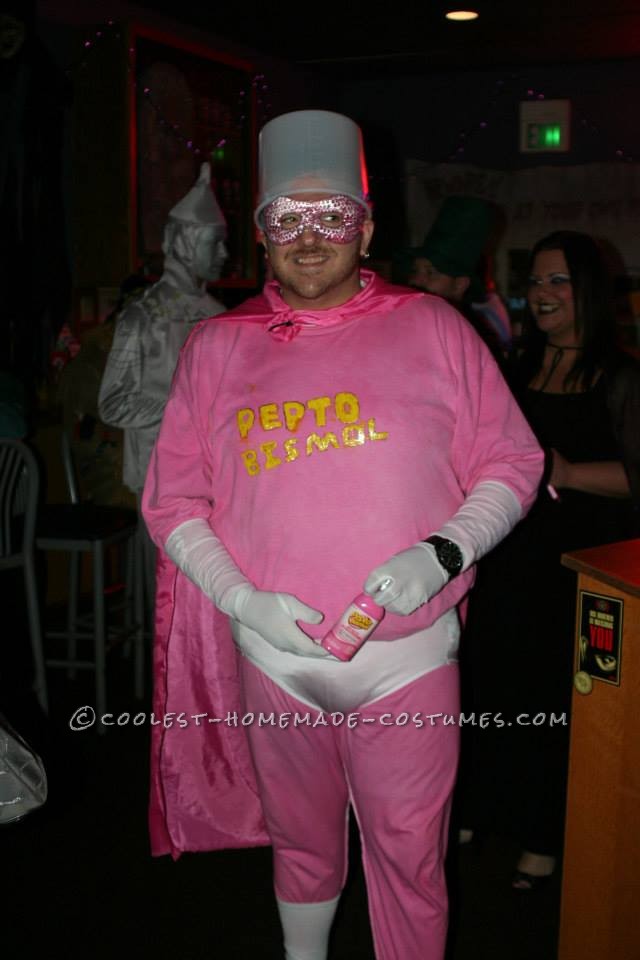 I came up with this Pepto Bismol Man costume on my own and had a blast shopping for everything and putting it together. It’s complete with a bucket on my head to measure out the Pepto Bismol needed to help save the day for anyone with upset stomach troubles. None of my friends really knew what to expect until they seen me change into costume and get in to character.

I am wearing women’s gloves, leggings and yes women’s panties. I had to drive all over town to find everything I needed, but it had to be perfect. I had an idea of what I wanted it to look like and i needed to find every last detail. The painted on Pepto Bismol name on my shirt is a little messy, I didn’t leave enough time to paint it and let it dry. But seriously no one cared once I stepped out in to public to show off my costume people went crazy. Everyone wanted their picture taken with me and I was told by everyone that I had the funniest costume and most original costume they had ever seen.

When people I knew realized it was me, they about laughed to death because it was totally something I’d do. I’m a pretty random funny guy so this costume was great. The first contest I entered I came in third and unfortunately every single person there thought I was snubbed. The second contest I entered Icame in first it wasn’t even close. I went to another bar that night and was told I’d have won first had I entered their contest.

This costume was very funny and original and made me very approachable. I have never had so many people come up to me and compliment me on the way I looked. it was like I was A celebrity. all in all it was a HUGE success. I’m happy to share this picture with you guys and please let me know what you think. Is it funny? Original? You tell me and hopefully it creates many more laughs and who knows, Maybe I can win this contest.

Thank you for taking the time to read my story and consider me as a contestant. I am including a picture of me in costume and one of me out of costume so you can get an idea of the transformation. P.S. the only one who DIDN’T like my costume was my puppy Taz. He had no idea who I was or what was going on and I scared the poor guy pretty bad :-( He almost attacked me then ran and hid in my house and would not come out. I also want to add that I do not and have never worked for Pepto Bismol or the company that makes it or distributes this product – this costume is non promotional and original. Thanks Again! 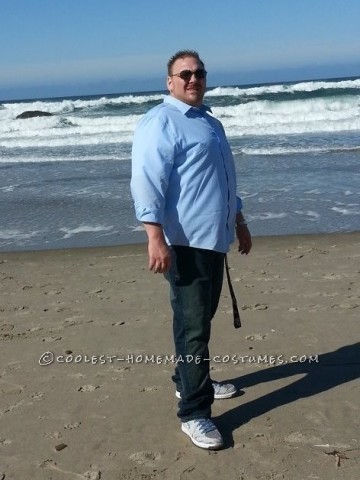