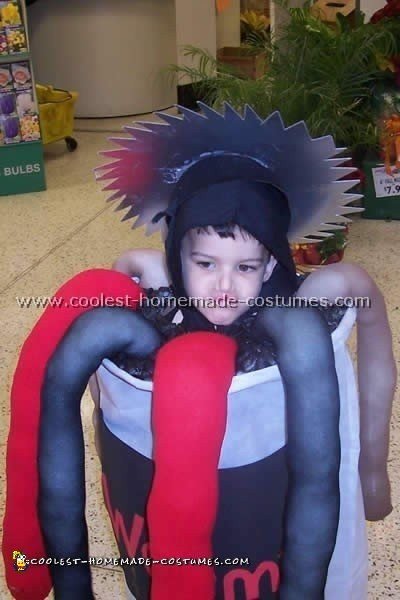 My mother-in-law always comes up with funny costume ideas and this time it was a can of worms costume. She is very creative. She made the body out of a laundry basket and covered it with material, took colored panty hose and made the worms and used cardboard and spray paint and made the top of the can lid for the head. It was a great idea!!

I was thinking of funny costume ideas when I came up with this one. I took 2 white poster boards and taped them together to make the shape of a can. Then I took a piece of cardboard and made a lid to look like an open can. I used a pattern off of a saw blade.

I spray painted this silver and duck taped it to the back of the worms can. Then took markers and made the square and worms sign on front of can. I added duck tape around top and bottom of can using small thin strips to work with.

I bought panty hose socks at Wall-mart. I chose a package with two different colors., I got brown and black. I used 3 black and 3 brown leggings of the panty hose, added pillow filling and shaped it to make it look like worms. I tied knots at ends. I draped them over the top of the can and hot glued them on the part that goes on the crease and bottom, which way they stand out of can.

I drew eyes on worms with black poster paint. I took one of the extra panty hose socks and stretched it out so it would fit over my child’s head. I took a black marker and drew a circle around my child’s nose and mouth. I took the stocking off, cut out the circles and put it back on. Then I drew 2 big circles around child’s eyes with black Halloween makeup.

We won first place and grand prize above all for our funny costume ideas.

Coolest Can of Worms Costume