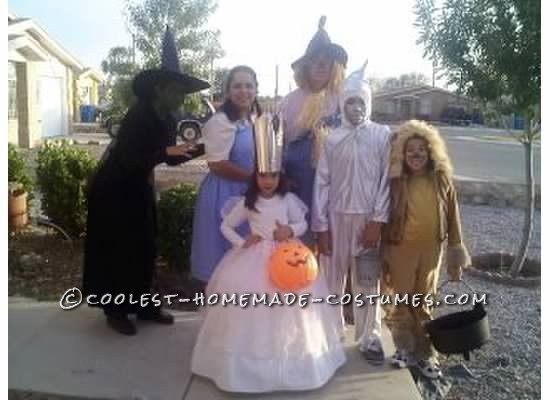 My mother made all costumes for the family. We just added the extras. I made my daughter’s dress of the good witch Glenda by buying from the second hand store a puffy dress. I added a special thing that went under the dress to make it even puffier. Then I got some lace and added more lace on the outside and I also bought some diamond starts and added as many as I could all over the dress.

Her hat was made of a silver cardboard that was bought at Hobby Lobby.  We all went trick or treating together so we all looked pretty cool.  People would point us out especially because of my daughter’s dress.  The lion was my nephew and I cut a baby’s lion out fit and made it to fit him.  My mother just added the pants.  The scarecrow’s costume was also homemade.  My husband found an old pair of overalls and the stuffing that came out of his arms and legs were made up from cut up pom poms.  We entered a contest at a Pizza parlor and we won first place for  a group contest.