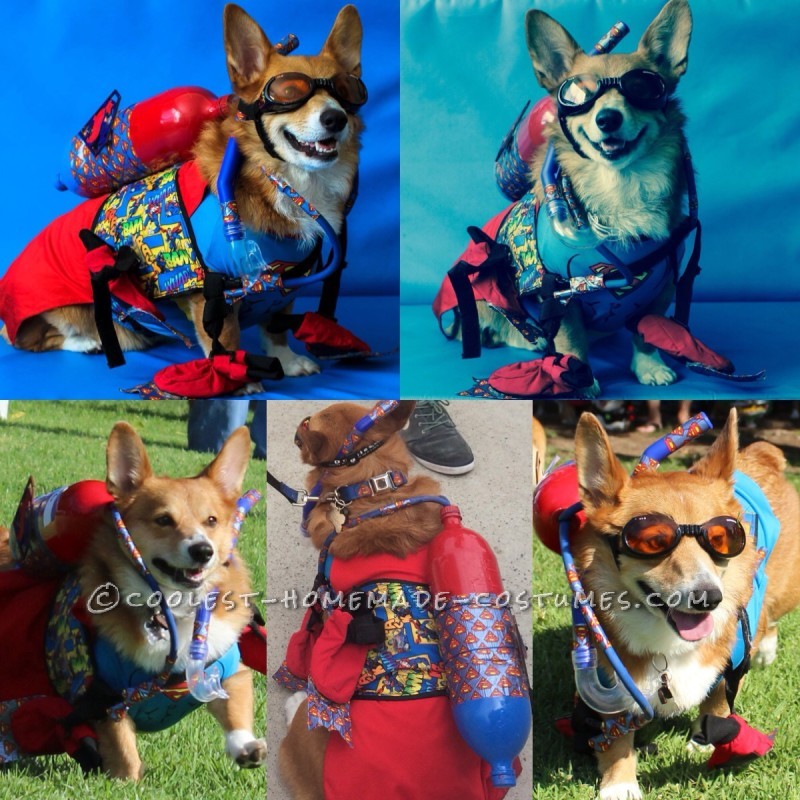 Under the sea where Jojo is his happiest, so we were thinking, thinking, and thinking some more. Nothing seemed to match until his mom and I saw a video of a dog scuba diving. We were in awe with the whole concept and thought that was going to be the best costume ever. We added a secret touch to it though, Jojo is known as Supercorgi_jojo all around the world so we added super corg theme!
It took about a month and a half to make, but it was amusing and fun the whole way. Picking up special fabric from the arts and craft store, grabbing different clothes from Babies R Us, picking up spray paint from Home Depot and finally ending with a few touches from Target. Jojo actually went to every store with us. Let me tell you, at Babies R Us, he will let you know he’s the prince and the baby of the family. It’s crazy but he will take us straight to the super man stuff in every store.
Directions to making it started a month out and went to the very last minute. His doglegs we made first. We got the ones with flames on the side, to add some flare to it. The snorkel was wrapped with super man duct tape up to the mouthpiece. I can assure you Jojo did not use it as a breathing apparatus, but there may have been a time or two it was used as a chew toy. We connected both by sliding it under the straps of the doglegs.
Next were the flippers, which unfortunately they do not sell ANYWHERE! So we got paper plates and cut them to look like flippers. Once completed, we wrapped them with Super Man duct tape. We connected the flipper to the bow-tie with about three sticks of hot glue. As I’d like to call it, corgi proofing the costume. They were a little hard to play in, but Jojo was a trooper.
Next was his superman costume with corg abs, a cape and all. We bought that online. We have used it for many surfathons so we knew it would be comfy and could get wet.
Last but not least, the breathing vest and apparatus. We purchased superman fabric and put it on a old worn out therapy vest Jojo used a long time ago. Everything was stitched together. We cut two one liter cokes in half. Then, spray painted one red and the other blue. We connected them and duct taped them with superman duct tape. We put two tubes for the regulators taped with superman duct tape and hot glued to the vest. With a finishing touch, a super-corgi coaster made specially by hand just for him to place on the breathing tank.
First time he tried on the scuba suit he hated it. Layed down and gave us the disappointed look. Second time he loved it, we also persuaded him with a treat and tennis ball. Jojo got 1st place at Huntington corgi Beach day out of 150 corgis. He got second at petsmart, and first place at Howl O Ween Coronado cares Halloween event. Let me tell you, he was a crowd pleaser! He couldn’t walk ten feet without getting a picture taken. He had high school girls chasing him around. I think if it came to Justin Bieber or Jojo, he would have got more cheering!
This was a great Halloween season, first one as a family since my corgdad was deployed last one. Thank you for doing this contest. We had so many laughs and so much fun making this costume. This sounds long but really easy, just make sure you get started early! Happy Halloween.