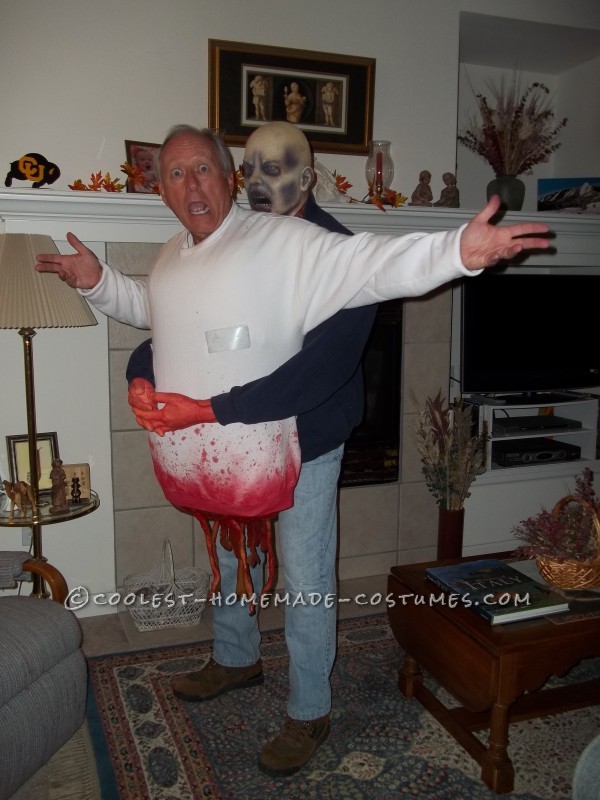 The cop I was talking to was cracking up.

I wore my Zombie Victim costume to the local Halloween Parade and walked alongside my grandchildren.  I had to stop every twenty feet or so to let parade viewers snap my picture.  Most of the comments I received were, “Awesome!” or “How did you do that?”.  A couple of people said, “That’s scary!” or “That’s disgusting!”

All I know is, I was having fun making people laugh.  Some of the younger children kept backing up until they tripped over the curb…their eyes never moving from my missing lower torso.

I bought the Zombie head at the Halloween store and ordered the hands (on-line) from a company in China.  I used a pillow for the Zombie’s shoulders and attached the head with a 1 X 2.  His arms were a pair of panty hose stuffed with cotton.  I made the guts from paper towels wrapped in coats of liquid latex, and glued them to another pillow under my own sweatshirt.

Later, when I went Trick-or-Treating in costume with my grandkids, one lady who had been watching me walk around, approached me and started asking questions.  She couldn’t figure out where the costume ended and where I began.  She asked me if my legs were real or fake.  (There’s only one pair of legs on this costume, and she had been watching me walk around on them.)  I told her the legs were fake, and that I had lost my real legs during the war.