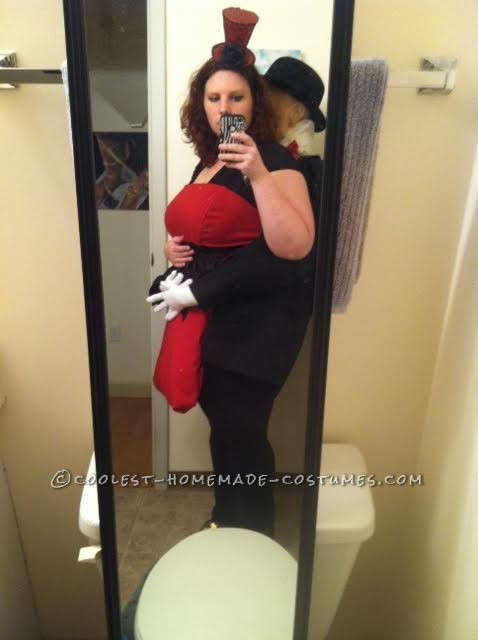 My friends and I are BIG into group costumes and this year we decided to do sideshow carnival freaks. I was the Torso Lady and after looking at vintage ads from real Torso Ladies from the Victorian era, loved the idea of making it look as though an assistant was carrying me around for the evening. So I started researching illusion costumes.

The upper body of the assistant (who I called Rahoul) is a duct tape dummy filled with pillow stuffing. I attached a Styrofoam head and an old man mask with a black hat on top. He also has a red bow-tie to match my red outfit. Inside are also two or three bamboo reeds to help give him some stability. I hot-glued a child’s backpack to the torso so I could wear him on my back. His hands are just white gloves that are also full of stuffing and I used Velcro to help hold them together (I also eventually added a safety pin just to be sure they didn’t accidentally open). Then I just added a suit jacket to the dummy. I went for one that was pretty long to help hide my sides.

My outfit is really two pieces: the red corset type thing goes all the way round my body (hence my desire to have a longer suit jacket) and then a red skirt I found made from almost identical fabric. The suit, corset, and skirt were all thrift store finds, so the fact that the skirt and corset matched perfectly was a great bonus! For the torso “stump” I added some of the pillow stuffing to a plastic bag to create the illusion of something being in there and wrapped the skirt up and around it, like a present, using duct tape to hold it all together. The top hem of the skirt got tucked under the bottom hem of the torso and safety pinned to the top of my pants.

Wearing the costume was just a matter of hoisting the back pack on my shoulders and pulling the straps tight to lift Rahoul as high as I could get him and then just bringing his hands around to my front and fastening them so it looked like he was holding me. I wore black pants and black boots and I added duct tape “buckles” to the boots to make them look a little more masculine since they were technically his legs and not mine. That was actually the hardest part: every time I posed for pictures I had to remember those weren’t “my” legs so to not strike a pose that was too sexy or whatever, haha!

People also kept thinking he was real, so when I was sitting down and his face was behind me people kept thinking I was actually sitting on some guy’s lap and I loved watching people try and figure the costume out. 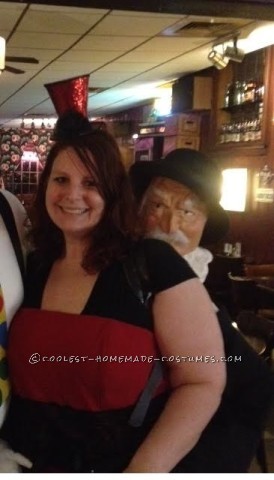 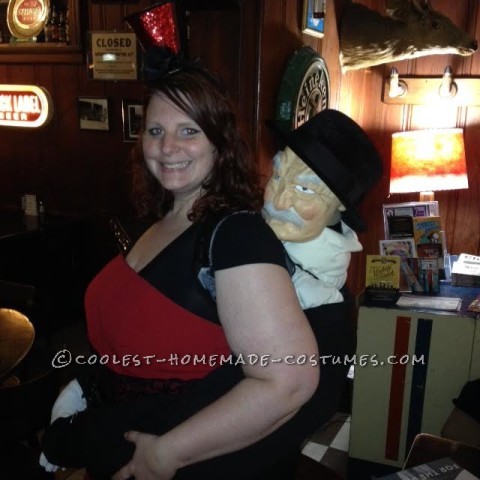