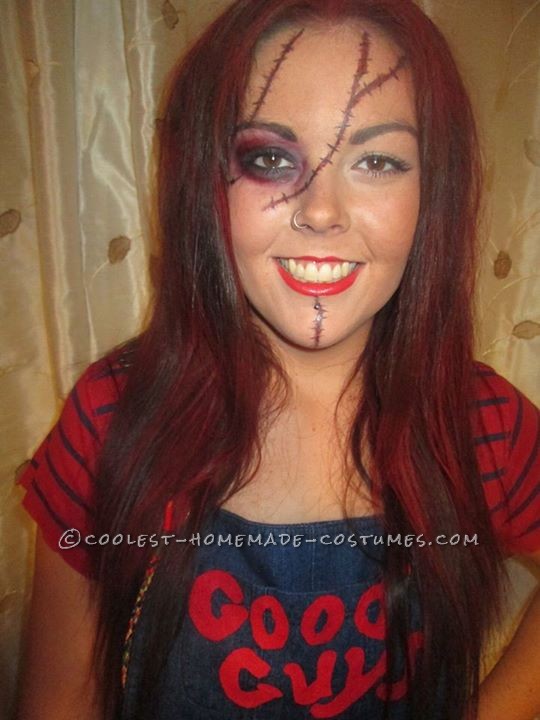 I’ve always been a fan of the Chucky films so this year I decided to go as a girl version of him for Halloween. I couldn’t find a t-shirt like the one he wears so I just picked the closest one I could find. It was long sleeved and high necked so I cut a lower neck into it and cut off the sleeves. I had a dungaree style dress at home already so I cut the sleeves that I had cut off the t-shirt into strips and sewed them on to the end of the dress. I bought some red felt in a craft store and cut out the letters to make the words “Good Guys” like he has on the front of his dungarees and sewed them onto the front of the dress. I got some red buttons at the craft store too and glued them on to it. Instead of wearing a wig I just bought some cheap red hair spray from a costume shop and it worked just as good and was much cheaper. For the make-up I put a lot of black and red eye shadow around my right eye and drew on the scars using black and red eyeliner and sort of smudged them to make them more realistic. I bought the white socks in a costume shop and I already had a pair of red converse. I added a fake bloody knife and I was ready to go! It worked out as a pretty cheap costume, about 20 euro overall, was simple to make and everyone complimented me on it for the night :) 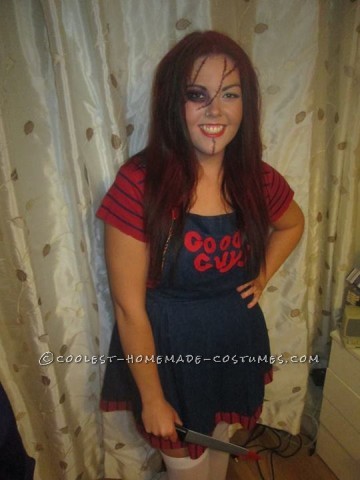