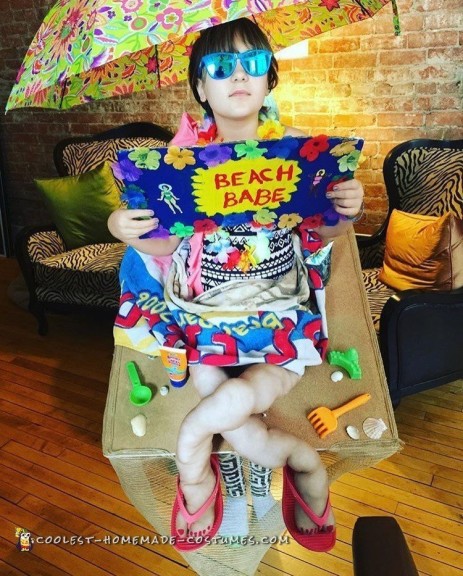 I came up with the idea for this illusion costume from this website! I saw a Flying carpet ride with a Genie and I recreated the costume as a beach babe! I started by going to the craft store and got:

I also went to a supermarket and got thin tights and the umbrella. Everything else I already had.

I started the illusion costume by measuring my waist and cutting a hole in the center. Then I cut a lot of empty space in the back of my hole so I put it on sideways but turn it so it will set on my hips. Then, I stuffed the tights with stuffing and set it on my board. Also crossed my legs then glued my feet to my flip flops and glued my shoes underneath the table.

The next thing I did was glue on sand. To do that I just put a big glob of glue everywhere rubbed it out with my hand and put some sand on and rubbed that on too. Then, I glued on shells, sand toys, a juice box and sunscreen.That was lots of fun! To get a nice glow, I painted a piece of cardboard blue and made a sun in the middle and wrote beach babe Also glued on fake flowers and two beach babes. And don’t forget to put tinfoil on the other side!

For finishing touches on my illusion costume, I put on a lay, covered up my hole with a towel, painted my fake toe nails, put on my bathing suit which I stuffed my umbrella stick down and put on my shades. Last but not least, I put on my sand colored fabric with some staples. I still think I am going to put some black trash bags underneath to help the illusion. I am really happy about how it looks! Also knowing I might be the first ever person to dress up like this.

Overall, I am looking forward to wearing this on Halloween! Oh, and make sure you count how many toes my beach babe has! People usually laugh when they see pictures of my costume.  They say that it’s nothing they’ve ever seen before. I like seeing peoples’ reactions to my costume because it’s not something you typically see.  I look forward to making my costumes each year and this year tops the rest.