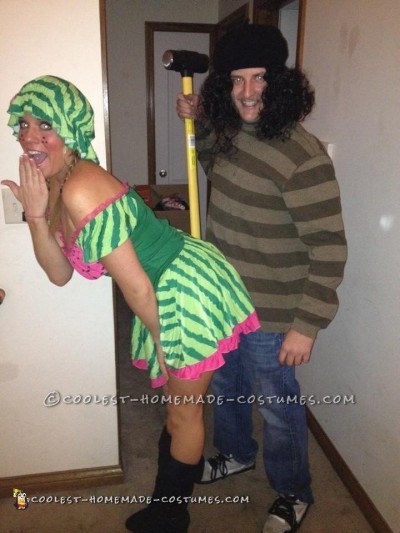 This costume was an absolute hit and so much fun to wear on Halloween night! There wasnt a single “what are you?” question from anyone! It was obvious that my boyfriend was dressed as Gallagher and I was his watermelon to smash. The costume was simple. I found the sexy watermelon dress and head piece from a lingerie shop online. I wore knee high boots and drew watermelon seeds on my cheeks with black eyeliner. The Pigtail braids are such a cute touch. My boyfriend grew out his mustache, bought a black curly wig and a black beret type hat. He had an old striped sweater he paired with regular blue jeans and borrowed his dads sledgehammer! It was so easy to organize and create. I firmly believe we were the best dressed couple there and people still talk about our hilarious costume that year!