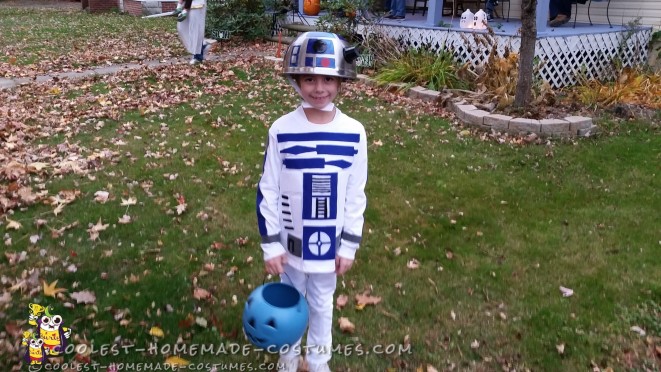 I don’t like to turn down a special costume request…if we can find a way to make it, we will make it!  My 8 year old daughter really wanted to be R2D2, the droid robot from Star Wars, for Halloween, but I was worried that she would not be able to move around much.  Her school has a costume parade, so she would be wearing her costume to school all day.  Therefore, the traditional trash-can R2D2 design was out.  So we decided to go with a simple design that allowed for a great deal of mobility, while still capturing the iconic elements of the character.  We also had to consider weather, because Halloween in Ohio can be quite cold.

The base of the costume is a simple white outfit: white pants, long sleeved white shirt, and white shoes.  I created the detail on the front, back, and sleeves of the shirt using felt and fabric glue.  We left the pants plain in order to focus the eye on the shirt.  I took screenshots from the film to match the detail as closely as possible.  Most of R2D2’s detail is on his front side, so I tried to recreate the most memorable features of the costume.  Blue felt strips run down the sleeves to resemble R2D2’s legs.  The back is mostly white/off white squares, like R2D2’s back in the film.

For R2D2’s trademark dome, we used a stainless steel mixing bowl.  I padded the inside with a dish towel that we duct-taped in place.  This kept the helmet from slipping around on her head.  I also attached plain white ribbons that velcro’d under her chin. Next, I painted the helmet with acrylic paint.  I used painter’s tape to create very straight lines.  I found a gorgeous color called Pthalocyanine Blue that made the perfect color over top of the stainless steel.  When the paint job was complete, I sprayed the whole helmet with clear coat to prevent scratches.  The red indicator light is made from reflective tape.  The round lens is a lens from a pair of costume John Lennon type glasses that I spray-painted black and hot glued in place.  The protruding piece is a medicine cup that we spray painted black and attached with hot glue.

The reaction this costume got was amazing.  My daughter was comfortable and could move easily, and had no problem going out trick or treating.  So many people stopped and asked if they could take her picture!  Our family went to a comic book convention a few weeks after Halloween and she got to wear it again–the Star Wars fans went crazy over our little R2D2!  Again, lots of photo requests and inquiries on how we constructed it.

The total time to create this costume was probably 6-8 hours, with most of the time consumed in painting the helmet.  Total cost was under $30–including the shirt, pants, and mixing bowl.  This was one of my favorite costumes I have constructed to date!