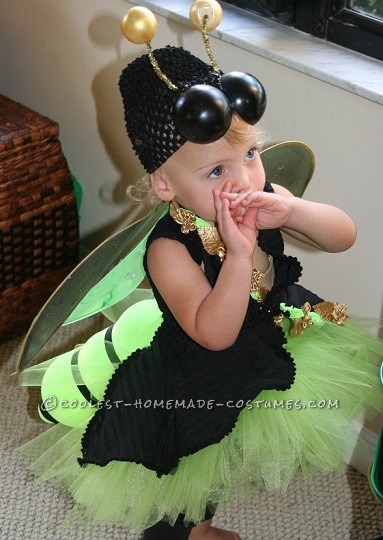 I have been making handmade costume for 28 years. I strted when my own children were young, I was a stay at home mom and couldn’t afford to buy costumes for my 3 kids so I would collect interesting costume pieces and accessories from thrift stores and garage sales throughout the year. To this day I can,t throw anything out that has the potential to be part of a costume.

I rarely have to leave the house when I’m constructing costumes because I have quite an inventory of $1.oo a yard fabrics that I’ve collected and hats, belts, gloves and other findings

I keep a notepad in the car and in the house and frequently write down ideas that I get for costumes. If I come up with an idea that I think is original I will check the Internet  to make sure no one else has already made a costume like the one I am thinking of. It agravates me when people use other peoples ideas to enter a contest. There are literally infinite numbers of ideas for costumes that have not been done. My dilema is deciding what idea to use.  This year I made my granddaughter a couple of costumes because I couln’t decide.

It turns out my grand daughter is a bit fussy and hates hats or head pieces so I had to alter my ideas to suit her personality. I did manage to get some pictures with head pieces, but she was not happy about it.

The Firefly costume is an idea I came up with because I have loved bugs since I was a kid. My mom was frustrated because I was always collecting insects . My favorites were beetles, grasshoppers, praying mantis, dragonflies and fireflies.

Fireflies are something most of us have fond memories of collecting in jars as kids.

I started the costume with a tutu dress that I made. I added a black sleeveless dress with flowers along the opening in the front. The tail is made from a 2 liter bottle covered in lycra with glow sticks added to the bottle to illuminate it.

The headpice is a crochet tube gathered at one end. I added pipecleanerwith ping pong balls for the antennae. The eyes are fabric softener bottle lids painted black and glued on.

I made the wings from wire covered with nylon stockings that I painted with diluted acryllic paint. They have elastic loops for wearing over the shoulders.

Everyone who has seen the costume absolutely loves it. She has had her picture taken by dozens of people. It is a light weight comfortable costume. To make this costume cost about $10 if you had to buy the materials.

There is also a lantern that I made out of cardboard that goes with this costume. 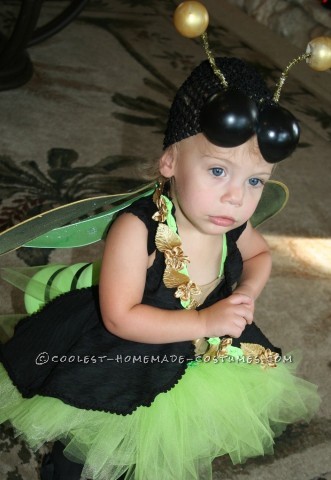 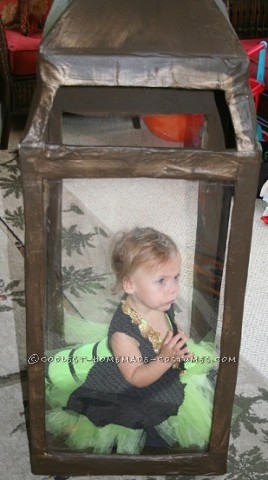 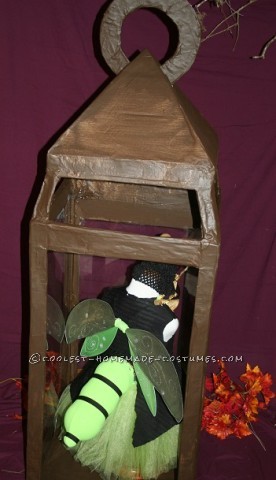 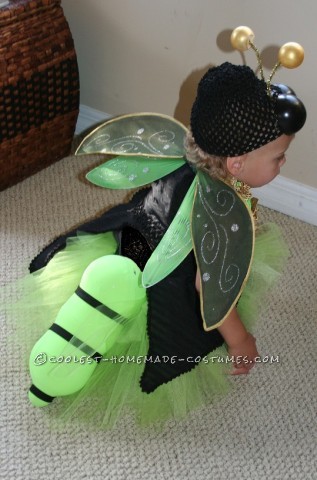 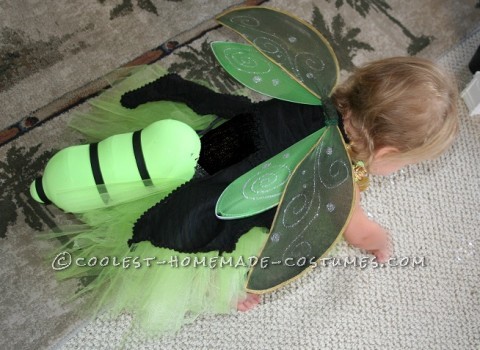