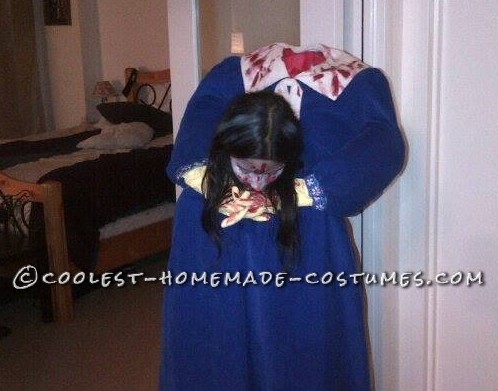 I made this  headless Mrs. Bloody Mary costume in an attempt to be ultra different and gory this year. I was tired of the usual vampires, witches or sexy Halloween costumes. I spent hours thinking of how I’d put it together, boy was it a surprise when all it took was 2 hours! Easiest costume that was the most affective on the Halloween “Boo”ze Cruise we went on! I not only WON the costume contest after being pitted against some pretty “melting face” Zombies and another equally creative costume, but I don’t even know how many people took pictures with me and wanted to know how I made this.

Never been so excited about something my life- and to think they say Halloween is for kids.

I bought a XXL dress from Goodwill for $10. That was the most expensive part of the costume! The dress was perfect Old Vintage with a bow collar. Went across the street to Blick art store and requested the employees to give me some cardboard they were throwing away from their shipments. Found 5 awesome LONG pieces of cardboard. They need to be verticle for height.

** I couldn’t find a rolling back pack anywhere like the website suggests, but the cardboard worked just as well.

I laid down a flat piece of board inside a backpack. The width of the cardboard was as big as the width of the back pack. I taped the rest of the cardboard pieces vertically on top of the base and topped it of with a horizontal piece. This was in the shape of a rectangle. I also stuck a long piece of cardboard vertically in the middle of the rectangular structure to give it some support.

The arms of the woman were stuffed with plastic bags from groceries and I stuffed the work gloves with paper towers and pinned them to the sleeves.

The neck was made out of a cut up small bottle of mineral water with red painted paper taped to it. I also added a cut up piece of the cardboard roll that paper towels are wrapped around, painted it red and glued it inside the mineral water bottle for a bloody bony stimp. It was topped with a crumpled paper towel. The whole neck was surrounded by crumpled pieces of paper (computer paper painted red) to make a bloody torso.

On the day of, my hubby helped me get in the dress, which had buttons for my head to stick out. He also stuffed a cushion inside the backpack/structure to make a body. I pinned the gloves under my head with safety pins and Voila! Mrs. Bloody Mary was good to go!

I’ve never had so much fun making something and been so inspired to blow everyone away with my costume.  Huge success! 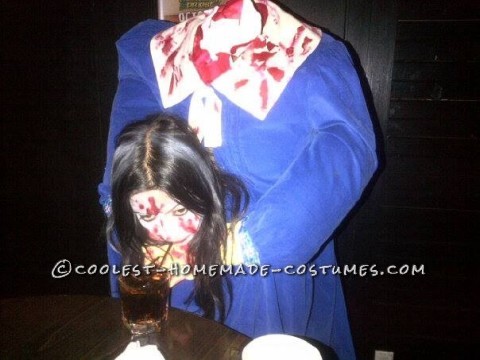 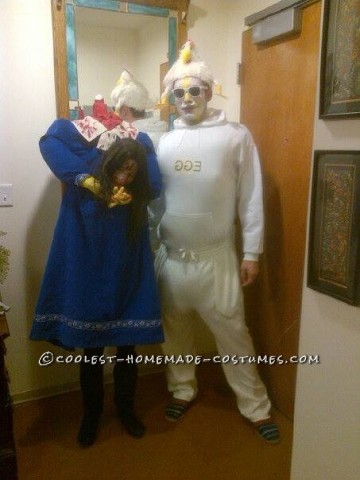